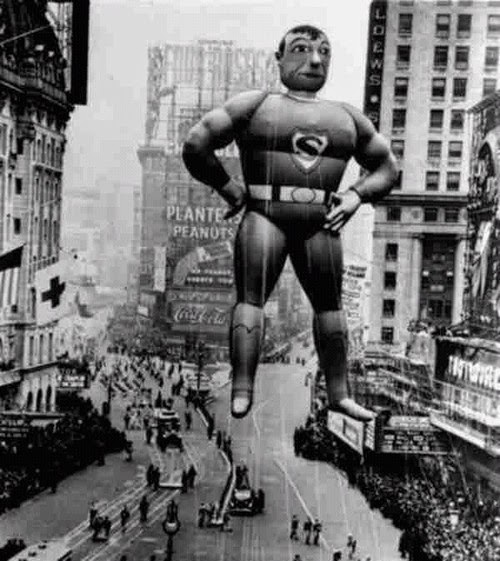 Happy Thanksgiving, friends! What are your plans on this most thankful of days? Ms. Bear was out in full force again, cooking up a scrumptious breakfast that included both eggs and bacon. We plan on staying in today and enjoying the parade, a spirited round of Yahtzee (I won yesterday!) and season three of Lilyhammer, which has quickly become one of our favorite shows over the past year. Oh, and you know I’ll also be enjoying an Internet-Free Thanksgiving today since I scheduled this post last night!

Wherever you find yourself today, I hope you’re with the ones you love — both the human and pet variety — and eating an indiscriminate amount of pumpkin pie with a beautiful mountain of Cool Whip on top. Happy day, friends! xoxo 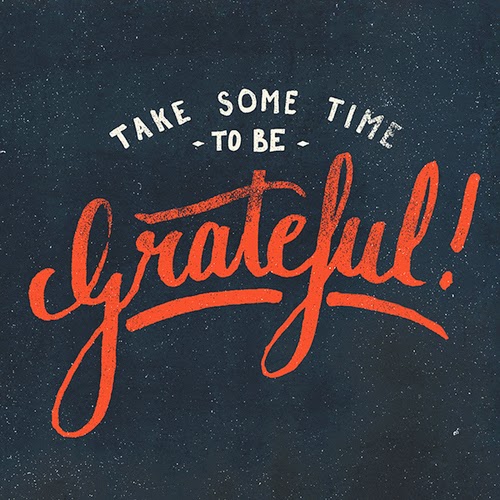 Every year when my family sits down to Thanksgiving dinner, we go around the table and each say all the things we’re grateful for that year. It’s a wonderful way to reflect on the previous year and everything that happened. What better time to actually see who we’ve become and see just how much we’ve evolved?

Don’t believe me? Well, friends, I’ve got a little something called science on my side. New York Magazine recently wrote about the link between giving thanks and a happy mood. According to research, the effects of saying those two simple words — “Thank you” — can last as long as a month.

Just one of those six tasks involved gratitude: The participants were asked if there was someone in their lives who was once particularly kind to them, but whom they never properly thanked. They then were instructed to write and hand-deliver a thank-you letter to this person. In the end, the gratitude task had the biggest impact on the participants’ happiness, and the effects were still measurable when the researchers checked in a month later.

Pretty uplifting, if you ask me. So in the spirit of all things thankful, here are five things I’m saying a big “THANK YOU” to this year… 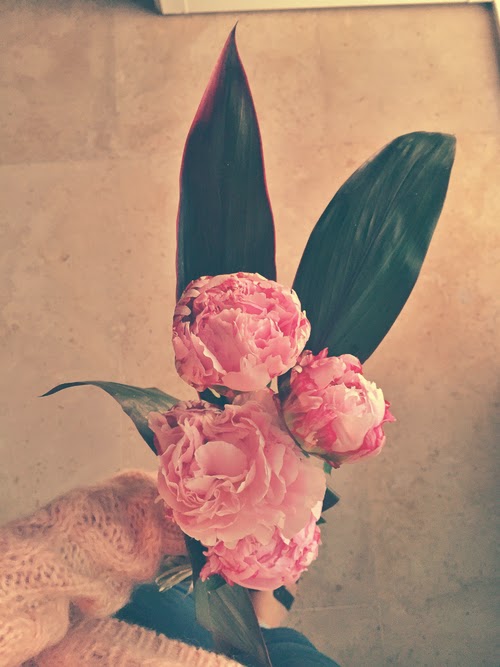 1. My family: Yes, easily everyone’s top pick, but there’s definitely NO shame in that. I’m not sure how I would have survived the last decade or so without my mom or my sister. I’m proud of the women we’ve become in my father’s absence. We’ve managed to carve out a new life for ourselves, especially when it was the last thing we wanted to do. And of course, our two cats made the journey so much sweeter. Oh, where would we be without Harry and Stella?

2. My health: No surgeries and no major illness is definitely something to celebrate. There was a time in my life when having just a couple surgeries in a single year was considered a triumph, so I feel especially lucky this year. I feel like — dare I say it?? — a normal woman for once in my life. AND I LOOOOVE IT!!!! Can you tell I’m slightly pumped about it?

3. So About What I Said: This blog? I know I’ve said it 651521515 times before, but I don’t know what I’d do without it. Sometimes, I swear it even keeps me sane. And YOUUUUU!!!!!! We are a pretty mighty, strong, fierce, passionate community. I’ve so enjoyed getting to spend the last six years with you, and I thank you for inviting me into your life. Together, I’m quite certain that we could take over the world, and I’m in no way exaggerating when I say that. You. Me. Together. The world.

4. Taylor Swift’s 1989: Best album of the year, hands down. It teaches you to just shake it all off and live life — on your terms and in whatever way you want! How liberating is that? FREEDOM!

5. Summer: Yes, I know it may sound like a weird thing to be thankful for, but my fellow Midwesterners will no doubt agree with me. Having survived the last few agonizingly cold winters, the summers have felt extra special — sort of like a gift. I know the promise of next summer is what’s going to get me through this brutal winter, so don’t let me down, Mother Nature! 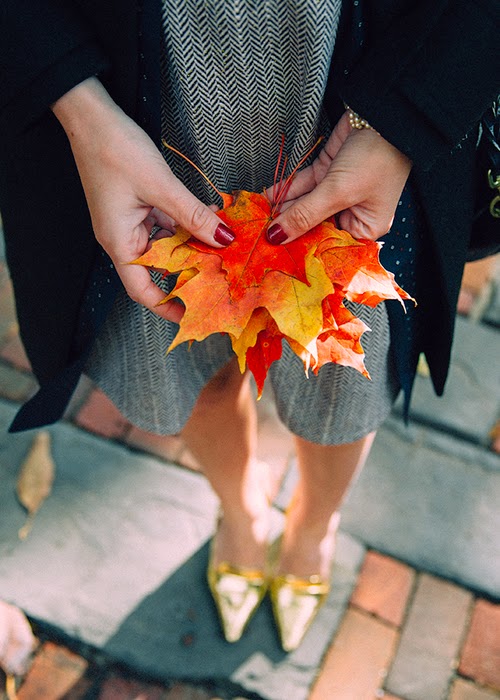 Ahhh, I do feel lighter — and happier — already! YOUR turn, friends: What are FIVE things you’re thankful for this year? Family? Pets? A favorite show? Go ahead and share your list in the comments, and let’s chat, shall we? xoxo 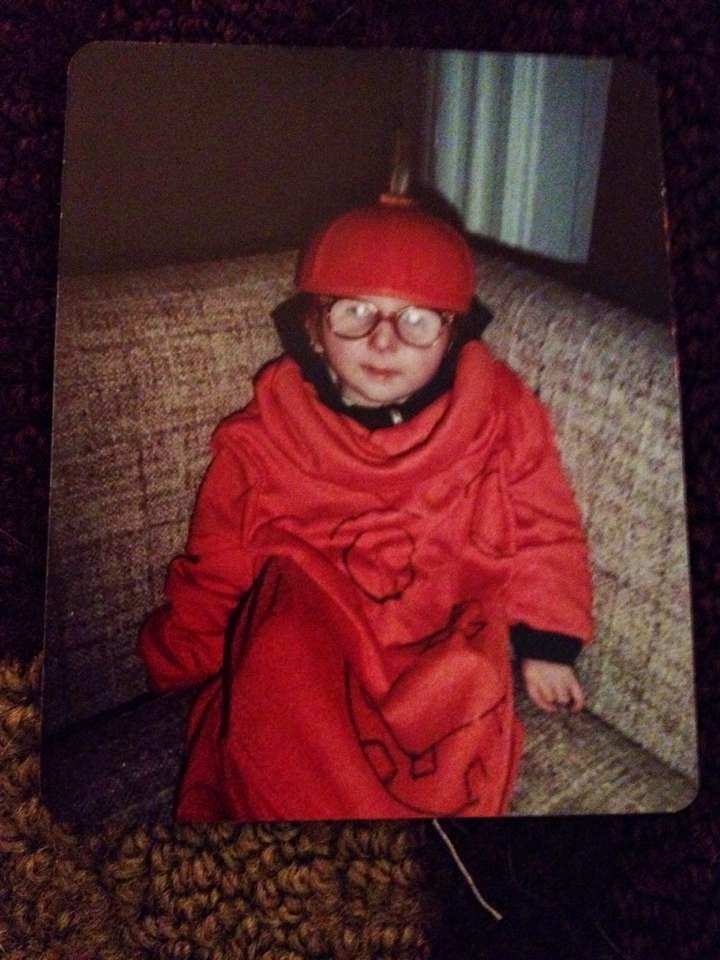 Happy Halloween, friends! Did you have a spooktastic day? Any fun plans for the weekend? My Aunt Wendy found this picture from one of the many years I was a pumpkin for Halloween. I guess my red hair just made my costume choice a no-brainer. Make sure you enjoy plenty of sweet treats today (and eat a handful of candy corn for me!), and here are my favorite finds from the wonderful Web…

5 ways to save more money.

Pumpkin pie and gingersnap TOGETHER!!

Chic items to cozy up your home.

Women In Clothes looks fascinating, doesn’t it? (via One Sheepish Girl).

Women and witches of the early 1900s.

Congrats (hopefully!) to Justin and Jessica!

Must try this 15-minute rule for house cleaning.

Do good. Thanks for the reminder, Krysten!

What a clever bike rack! (via Swiss-miss)

A teacher spent two days as a student and was shocked by what she learned.

Which Halloween costume was most Googled in your state?

So excited for Taylor’s new album…what do you think of her new sound?

27 perks of being short.

Fun fact: Turns out some of those Mad Men scenes are quite real.

Just another reason why I LOVE Buffy The Vampire Slayer!

12 easy way to spruce up your desk.

**Don’t forget to enter the Follow Your Arrow print giveaway — you’ve got until next Wednesday!! 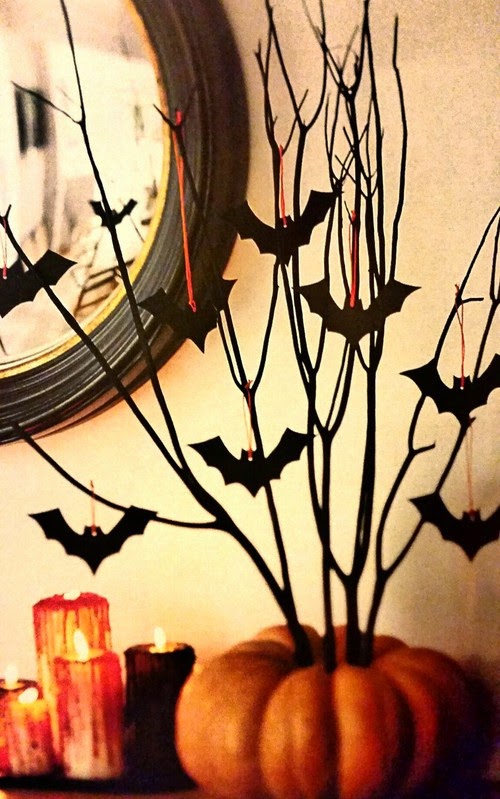 Speaking of Halloween, it was such a magical time when you were a kid, wasn’t it? It was the day of the year where you could be anything you wanted to be. A cowboy. A queen. A ghost. A Disney character. Needless to say, the possibilities were endless — as wide as our imagination, actually. Half the time, choosing a costume was more fun than going trick-or-treating. Even years later, there are those costumes that hold a special place in our hearts, and it didn’t take you very long to remember them, friends…

*We went trick-or-treating with our besties, and it was always AMAZING!! Some of our best times growing up. The best costume was homemade! My middle brother and I were tots and our mom made us home-sewn (with wigs) Raggedy Ann and Andy.

*I like the challenge of being creative with costumes. Each year, creative folks try to out-do themselves from the year before. Nothing like some creative competition with oneself. My favorite costume from when I was a kid was either when I was Cinderella, my own pumpkin coach included, or when my mother made me into a pizza! No one else I know was ever a pizza for Halloween, and that makes me proud of the creative person my mother is, and my willingness to be different during my early adolescents.

*I love Halloween because it’s a time where most people can be who they truly feel inside with no judgments. My dad worked for Union Carbide; they made Glad bags. Not much money, but we had a whole lot of fun. We would wear them as costumes!

*Pooling all our candy in mom’s big silver bowl. She kept in on top of the fridge and doled it out. Tootsie Pops were my favorite. 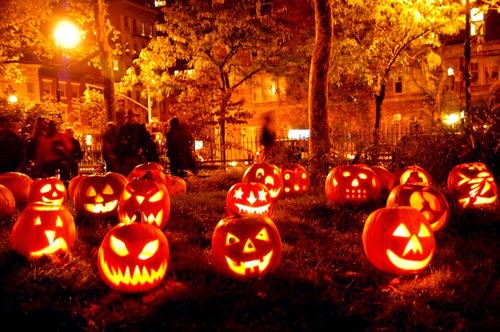 Growing up, I remember sporting a variety of costumes over the years. I’m pretty sure that my mom dressed me as a pumpkin for the first few years of my life. I’ve also been a devil and a clown, but my absolute favorite was when my older cousin Mona and I dressed up as matching dice. She was always like that older sister I looked up to, so I felt quite cool walking next to her! Oh, the lovely memories! Anyway, here’s next week’s question…

If you could eat dinner with any famous person, who would you choose and why?


[Photos via We Heart It] 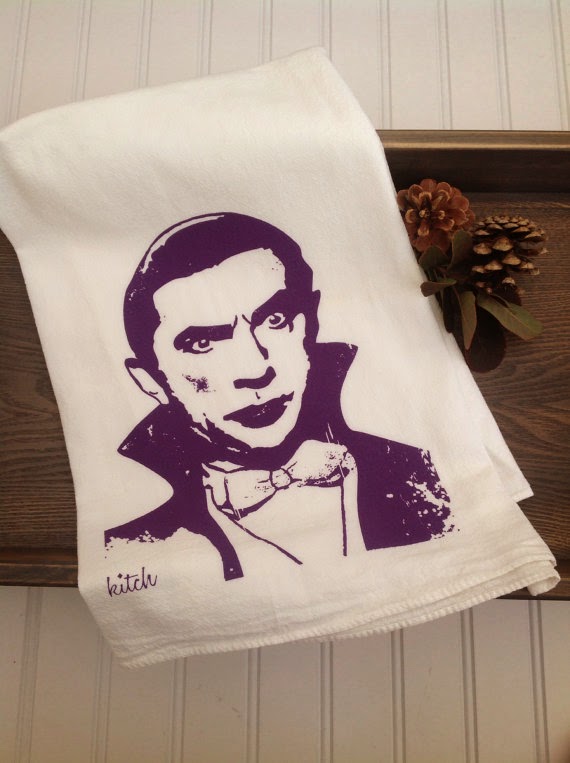 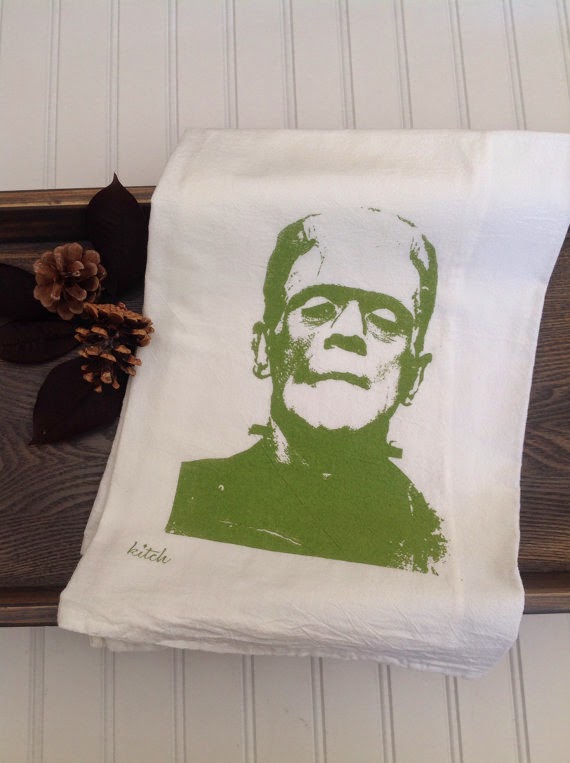 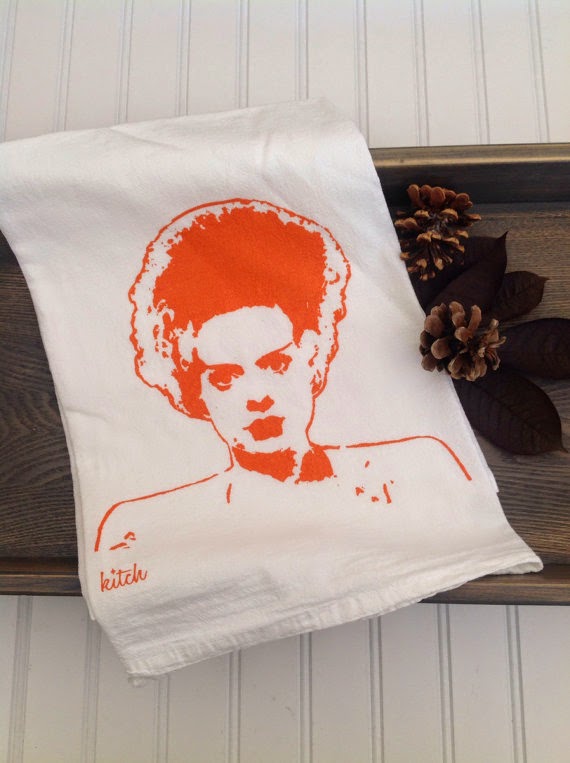 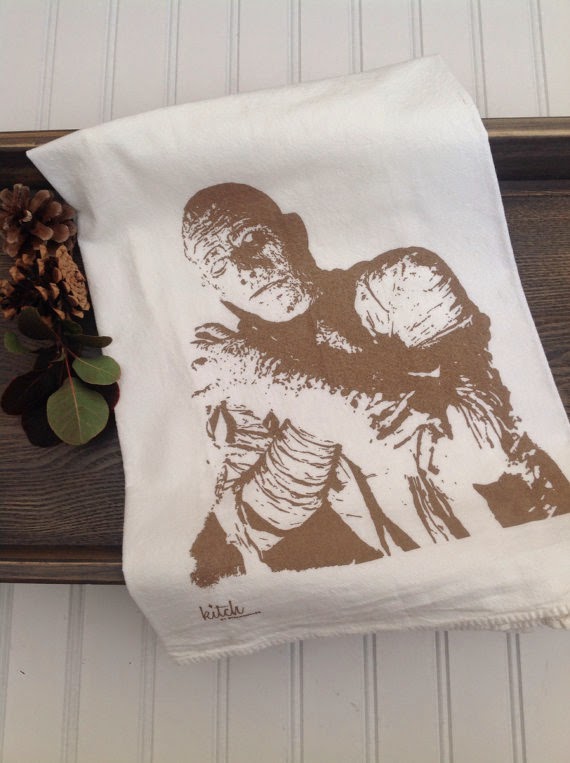 Just in time for one of my favorite holidays! How cool are these Halloween-themed tea towels from KitchStudios, the Buffalo, New York, towel and home decor shop? Dracula! Frankenstein! Bride of Frankenstein! Mummy! Oh, my! They sure put me in a spooktacular mood on this Tuesday morning, especially since I’ve got a date with the dentist! Yikes! xoxo