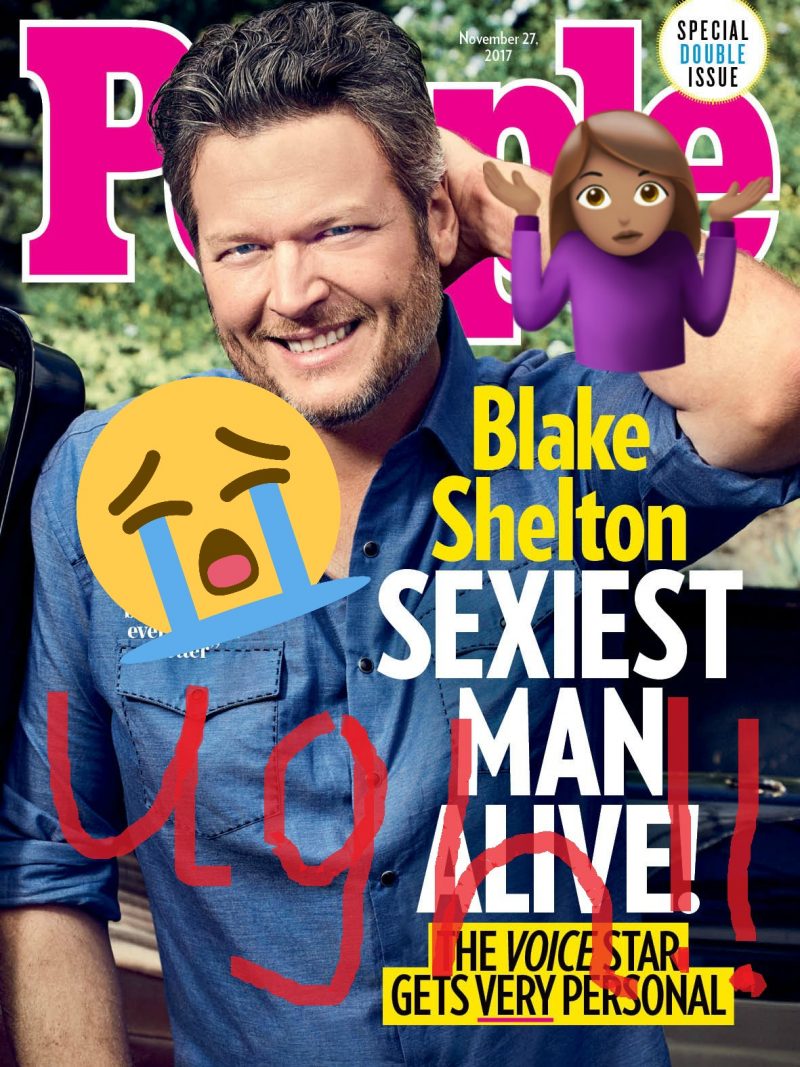 Yesterday, in a tradition that has become most epic and iconic, People magazine announced their pick for this year’s coveted Sexiest Man Alive. Obviously, the title comes with many perks: Bragging rights. A splashy national magazine cover prominently displayed in the checkout aisle — a cover that would send women into fits of hysterics while on an after-work Target run. And, a sizable platform to present yourself to the world and really make some kind of positive impact.

Well, this year’s cover was successful in one regard: It did send me into fits of hysterics. But these hysterics weren’t of the happy, “OMG, I looooove him” variety! No, they were more like, “Uh, wow! So we’re going with ANOTHER white dude bro, huh?”

We already have a white dude bro in the White House. I don’t need to see it on the cover of People too!!

Because, let’s just go ahead and put all our cards on the table here…Blake Shelton is about as mainstream (read: safe) as you can get. He oozes that good-old Southern Boy charm, and he sings about such quintessential American staples as trucks, beer, girls, drinking beer while in your truck cruising for some girls. It’s all very…bland. And, honestly, it’s been done so…many…times…before.

Do you see where I’m going with this?

Frankly, it’s just all getting old, and I don’t know about you, but I’m DONE with it all. The last year has been one giant, uphill battle that we’ve climbed, only to get to the top and see a raging dumpster fire of crookedness, evil, rampant sexual assault, entitlement, mansplaining and men just behaving VERY badly in general. So to see it basically glorified in a glossy magazine (yet again!) is just downright troubling, not to mention pretty insulting all around. As another white dude bro would probably say, “So sad…yuge mistake!”

And thankfully, it looks like I’m not alone in my assessment. ELLE magazine is also questioning the choice, writing, “Wow indeed. 2017 is doing the absolutely most in the absolute strangest way possible. We need a special counsel to investigate this because I am sure that this is just Putin trying to make us crazy…I know all men are trash but I wasn’t aware that they were all dead, also.”

Now there’s a magazine that speaks the truth, if you ask me!! I’m more than ready for a big, sweeping change to come rolling through. You know, something to shake up this sad, unfortunate status quo this country has got going on right now. I mean, I can think of thousands of better choices than Mr. Shelton, like Sterling K. Brown, John Cho or Jesse Williams.

Or, what about a man in a wheelchair like Stephen Hawking. Or that guy named Barack Obama — I heard he’s done some pretty inspiring things. I need him back in my life, in any way possible!

And those, really, are just the examples I can think of off the top of my head.

As my writer friend Sarah said…

Ugh, I have nothing against Blake Shelton, I mean, he’s all right, seems like a nice guy, but omggggg, People has a way of picking the most boring, generic, cookie-cutter white guys. Pick someone quirky like Adrien Brody or something…

Sarah, I couldn’t agree more! In fact, I think the majority of America would agree with you!

What do you think, friends?? Did People get it right? Who else would you nominate as Sexiest Man Alive?? Let’s start next year’s campaign early!! xoxo 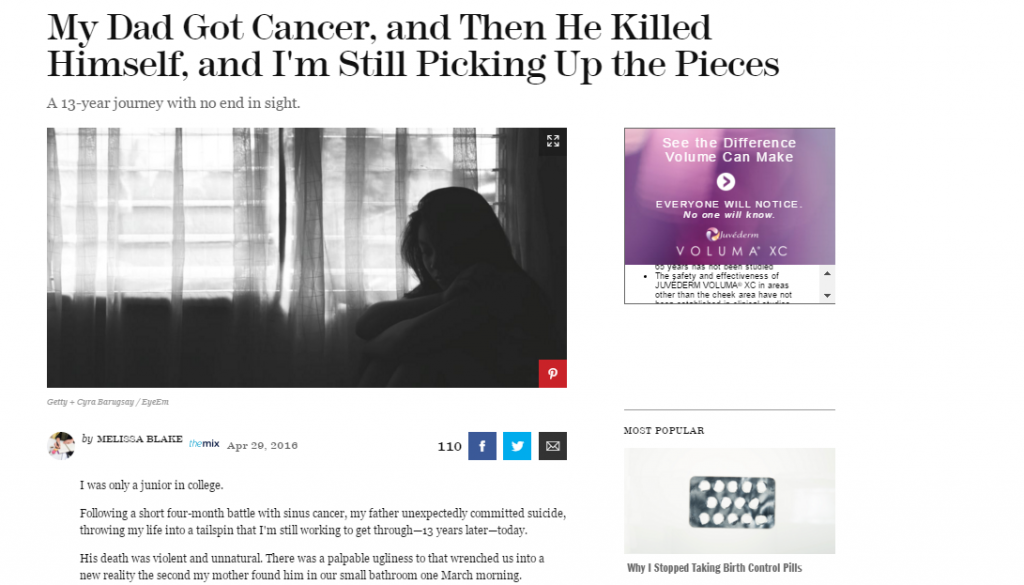 Exciting news, friends: I had a new essay published on Marie Claire last week! I’m pretty proud of this one because it explores just how much I wanted my grief to “fit in” somewhere after my father’s death. I needed to feel like I belonged somewhere — anywhere — and that there was a safe place where my emotions could be understood.

Here’s an excerpt from the essay, which also got picked up by Good Housekeeping over the weekend…

A few years into my grief, my mom and I attended a National Survivors of Suicide Day conference in Chicago, a day where survivors come together to share their stories and give support to one another. While I listened to everyone’s stories, I couldn’t help but feel out of place. It was as if I was looking into a world full of these experiences that had nothing to do with my life — I just couldn’t identify with anyone, even people who had lost a parent.

When it was my turn to speak, I shared my story, but I felt like it wasn’t really “my story.” They were my words, sure, but this was the story of someone else’s life, not mine. It was as if I was sitting outside the scene and looking in; everything was so remote, so foreign, so unfamiliar.

In fact, I didn’t seem to fit in anywhere. My father had cancer, yes, but that’s not technically what he died from — so was I really a member of the cancer survivors community too? And although he committed suicide, he’d never had a history of mental illness, so how could I be the traditional survivor of suicide? In grief, feeling like you fit in somewhere — anywhere — is a very powerful and necessary thing, so to feel like I was alone was even more isolating.

I’d wanted to connect so badly to something, anything, that would make me feel like I was understood. My father was gone and my grief was real — and more than that, it mattered. My family understood, sure, but for some reason, I wanted everyone else to understand as well. I started feeling like I was trying desperately to still connect with my father, to bridge my former life with the one I’m living now.

You can read the full essay here and I’d love to hear your thoughts. Feel free to email me anytime at mellow1422@aol.com and let’s chat! And of course, feel free to share my essay on Facebook, Twitter or even your local refrigerator. If you share on Twitter, be sure to tag me @melissablake so we can connect! I can’t wait to hear from you! Love you all… xoxo

P.S. Catch up on past essays: I’m Physically Disabled, But I Want Love, The One Thing That Helped Me Heal From My Dad’s Suicide and My Father Committed Suicide, But He’s Still My Superhero. 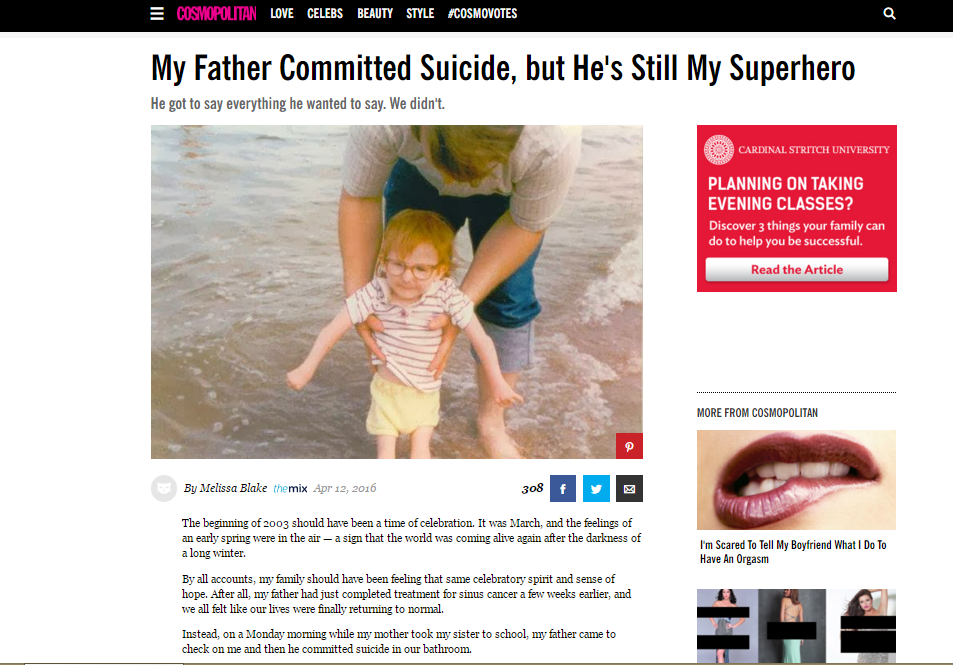 I’m SO excited to share my newest essay on my father’s suicide for Cosmo! It went live yesterday, and I think it turned out really well. As I was reading it over again (I’m not the only one who does this, right?), I couldn’t help but notice that maybe, just maybe, I’ve progressed on this whole grief journey I’ve been on for the last 13 years. I’ve written a lot about suicide and it’s aftermath, but this essay felt a little different. For the first time, it touched on coming to a bit of closure — well, I suppose, as much closure as you could ever get following the suicide of a loved one. But it’s a start, right? And that’s what’s most important to me.

Here’s an excerpt from the essay, which also got picked up by Redbook and Woman’s Day…

Maybe that’s the thing about suicide: It’s ugly. It’s messy. It’s complicated. And, as we learned, it doesn’t discriminate — it doesn’t care if you’ve had a perfect life or if you’ve been happy every day of your life. And in it’s aftermath, as my anger eventually turned to sadness, I began to see that suicide isn’t just something that happens to the person who dies. It happens to everyone around them. It’s a family disease, creating ripples that are felt and carried by the survivors for the rest of their lives.

I like to think that if my father had the choice to go back in time, he would do things differently. I have to believe that because if I let my mind wander too far into a dark place, I start to wonder: Why? Why did my father, the ultimate family man, take his own life? How could he just leave us like that? Did the treatment cause damage to his frontal lobe, the part of the brain responsible for impulse control?

We’ll never know and that’s left a permanent hole in my heart.

For those left behind, life is never the same and sometimes, you find yourself struggling just to hang on. Maybe I’m not drowning in the grief anymore, but it is with me. Every day. Everywhere I go and everything I do. Still, I try not to let it eat me alive either.

You can read the full essay here and I’d love to hear your thoughts. And, PLEASE, never forget that there is help out there. Don’t be afraid to speak up and seek help if you or someone you know is depressed or suicidal. Call the National Suicide Prevention Lifeline at 1-800-273-TALK (8255).

P.S. Feel free to email me anytime at mellow1422@aol.com and let’s chat! And of course, feel free to share my essay on Facebook, Twitter or even your local refrigerator. If you share on Twitter, be sure to tag me @melissablake so we can connect! I can’t wait to hear from you! Love you all… xoxo 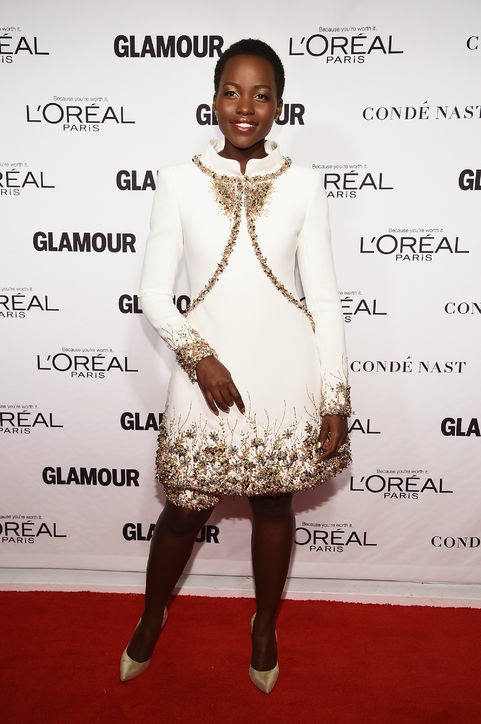 It’s hard to believe it’s been less than a year since the world discovered the beautiful and talented Lupita Nyong’o. In case you’ve been living under a rock, Nyong’o first captivated the world with her star-turning role in 12 Years A Slave — a role that won her the Best Supporting Actress Oscar and officially marked 2014 as her year.

Nyong’o now has another accomplishment (well, two, actually!!) to add to her ever-growing resume: Glamour cover star and Woman of the Year. The star graces the magazine’s December issue and was honored this week at the annual Women of the Year ceremony. She thanked her family for raising her to see women as equals. And I especially loved what she had to say about true beauty…

I come from a loving, supportive family, and my mother taught me that there are more valuable ways to achieve beauty than just through your external features. She was focused on compassion and respect, and those are the things that ended up translating to me as beauty. Beautiful people have many advantages, but so do friendly people…I think beauty is an expression of love. 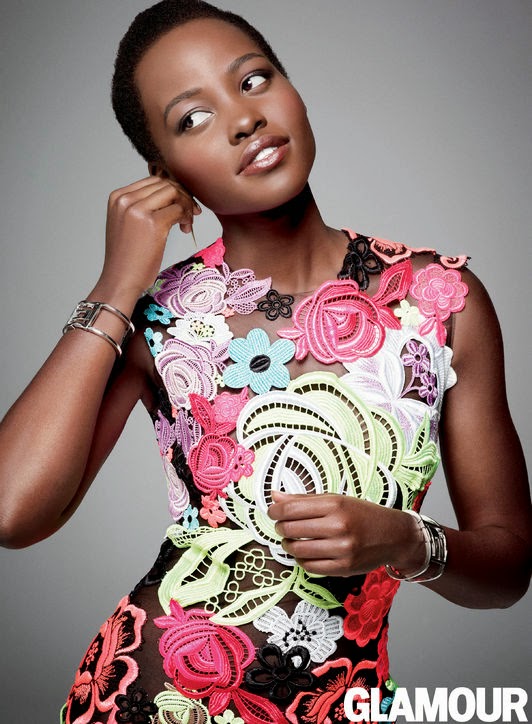 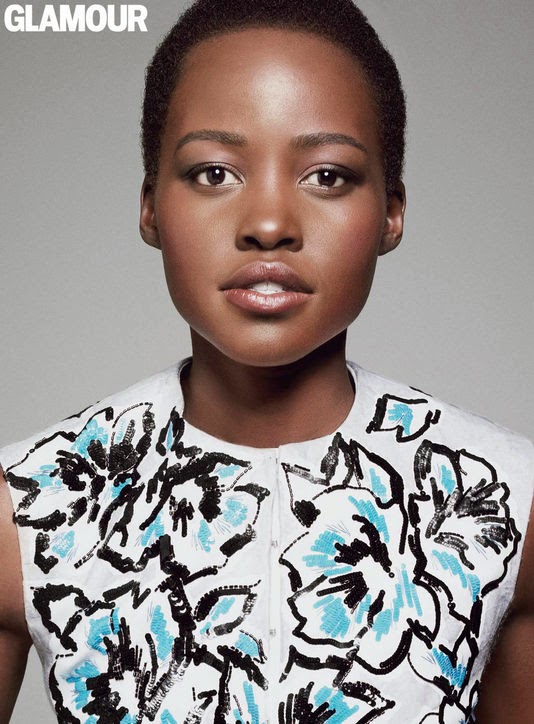 And when it comes to value and diversity…

To rely on the way you look is empty. You’re a pretty face—and then what? Your value is in yourself; the other stuff will come and go. We don’t get to pick the genes we want. There’s room in this world for beauty to be diverse. 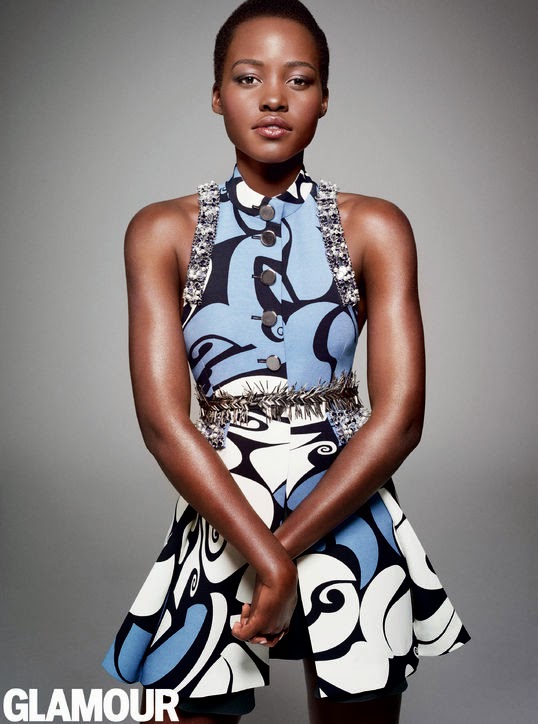 Ahhh! How refreshing is that? Brave. Beautiful. Articulate. Sounds like the definition of glamour to me. What do you think, friends? xoxo

P.S. More inspiring moments from Women of the Year 2014 and more Girl Crushes. 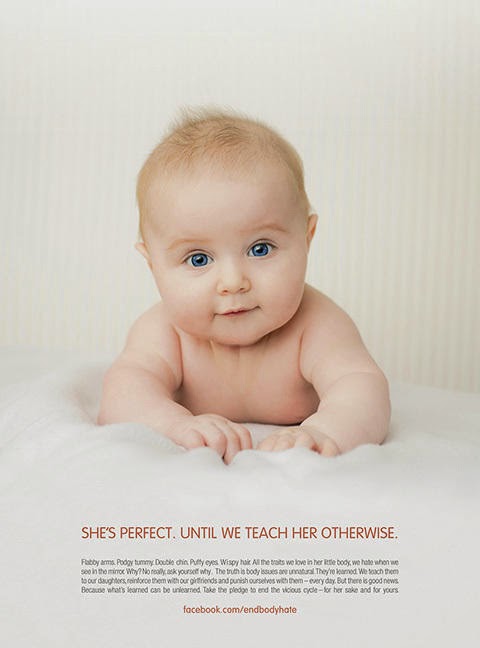 Marie Claire Australia asked six ad agencies to come up with the perfect print ads all in the name of self-acceptance. They wanted to teach women to love their bodies and see how creative the advertisers could get without any sort of restrictions. The results are pretty darn amazing… 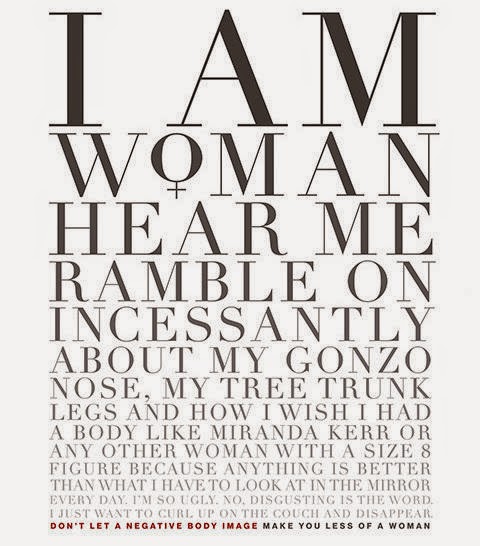 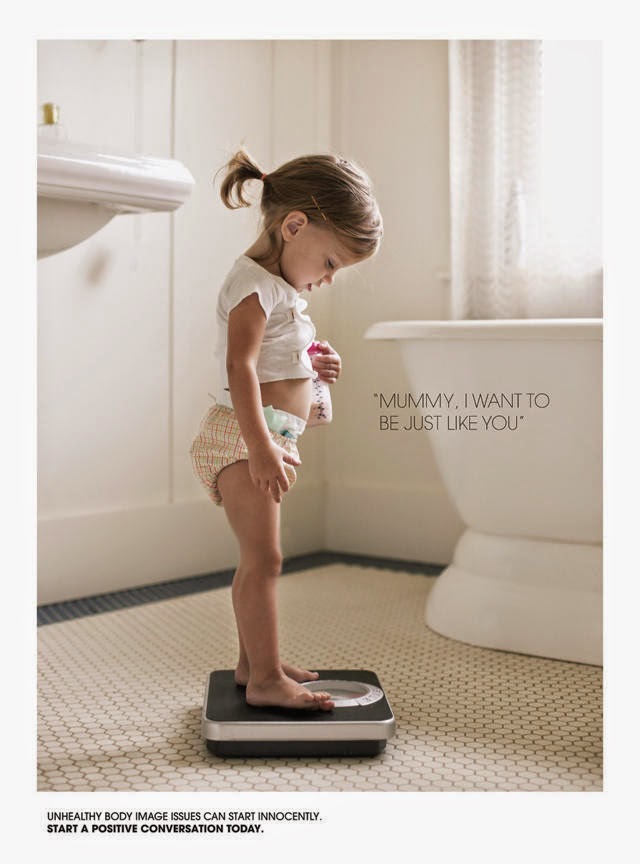 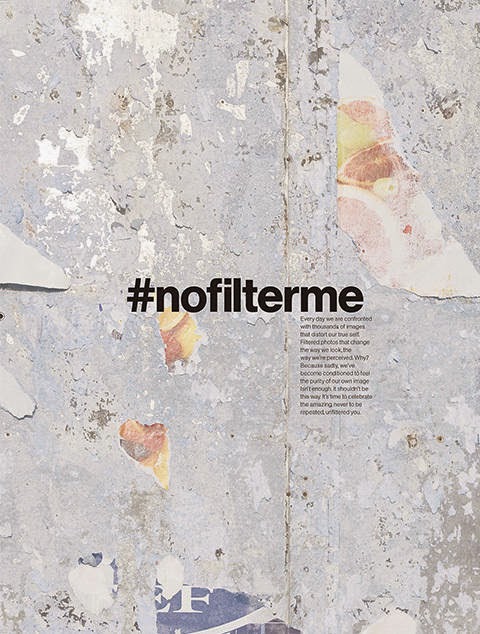 Bravo! Aren’t these ads amazing? They really make you think about all the little subconscious things we do every day to sabotage our positive body image. No more! What do you say, friends? What will YOU do today to show yourself some love? xoxo