Originally, I had planned on writing this post next week, but after Alabama’s abortion ban vote yesterday, I knew it couldn’t wait another day. Things really are that dire, and women’s lives are literally at stake here.

Late Tuesday night saw the Alabama Senate vote 25-6 to pass the country’s most restrictive abortion bill — one that contains ZERO exceptions even in cases of rape and incest. And yesterday, the state’s governor Kay Ivey signed the bill into law, cementing a future that is treacherous and all too similar to The Handmaid’s Tale.

Yes, a WOMAN governor signed that bill, a cruel twist that shouldn’t be ignored, even invoking God in her reasoning: “This legislation stands as a powerful testament to Alabamians’ deeply held belief that every life is precious and that every life is a sacred gift from God.”

Really? Every life is precious? Every life? That doesn’t seem even remotely accurate from where I and so many Americans are standing right now. And, frankly, where we have been standing for years, all the way back to the passage of the landmark Roe v. Wade in 1973 — and, to be sure, in the years before the legislation.

Make no mistake. This is a full-on war on women’s autonomy; it’s dangerous, harmful and, once again, tells women that they don’t matter. Alabama’s abortion ban further confirms what many of us have known for YEARS: Pro-life is a misnomer. If you don’t believe in protecting women’s lives, it’s past time that you stopped calling yourself pro-life. I just want to shout five words from the rooftops to the entire world…

This isn’t rocket science and this is something we should already know: Women are human. They’re people who deserve bodily autonomy just like men. Society likes to tell women that they should smile more while simultaneously taking away our reproductive rights, paying us less, talking over us and generally treating us as second-class citizens.

Well, guess what? Women aren’t smiling. And we shouldn’t have to, either.

I’ve also been trying to wrap my mind around Alyssa Milano’s proposed sex strike and…just no. It’s a dangerous step back for women and goes against everything women have fought so hard for. It once again reduces women to an object that can be used as a bargaining chip. It tells women that their sole purpose in being intimate is procreation — and it puts the onus on them to prevent pregnancy when men are just as responsible. Please, let’s not push this toxic, outdated narrative. It doesn’t help anyone.

The essay “Men Cause 100% of Unwanted Pregnancies” by Gabrielle Blair explains things perfectly, especially when it comes to holding men accountable: “Often, men don’t know, don’t ask, and don’t think to ask if they’ve caused a pregnancy. There are often zero consequences for men who cause unwanted pregnancies.” 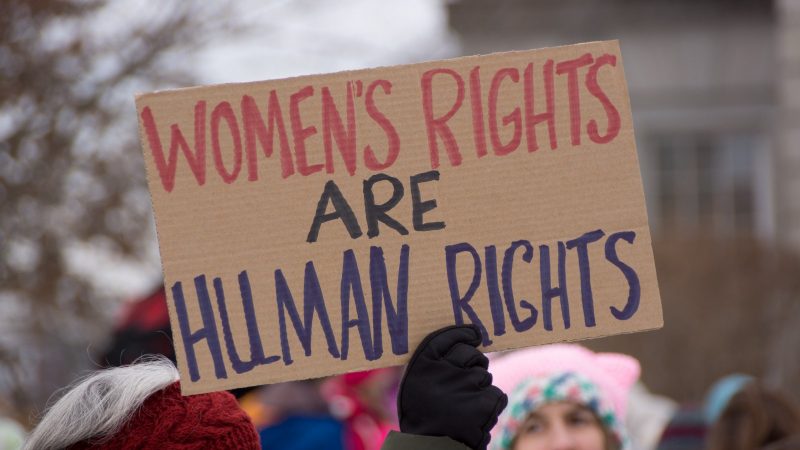 What We Can Do NOW: It’s easy to feel helpless, but there are some wonderful organizations doing amazing work to help women, like Planned Parenthood and NARAL, which advocates for a woman’s right to choose. Also, The Yellowhammer Fund, part of NNAF, is based in Alabama and provides funding for abortions at the state’s three abortion clinics as well as helps eliminate economics barriers for patients, such as travel and lodging.

The Cut put together this helpful round-up with tons of other ways to get involved, and I encourage you to read and share it on social media.

I’m honestly scared of where we go from here, but let’s get something straight about what this ban is really about. It’s not about protecting life. It’s about controlling women and taking away autonomy over their own bodies. This is what Alabama said to every woman this week: You don’t matter. Your rights don’t matter. You are not a person. Conservatives want to keep their guns while women are desperately fighting to keep their bodies.

If nothing else, we must remember this: My body. My choice. My rights. We must always keep fighting against the abortion ban, friends… xoxo