When I thought about bringing back Tuesday Tunes for 2017, I knew the song had to be *just* right. I mean, it couldn’t just be any old song; I mean songs like Don’t Stop Believing just weren’t going to cut it today — no offense to Journey or anything. And then Lady Gaga happened. More specifically, she unleashed her powerhouse of a performance at this year’s Super Bowl halftime show, and, well, American went wild. And I was reminded of one very important lesson…the beauty that can come when you’re fully and authentically being who you are. Or, to quote Gaga herself, when you’re “born this way.”

It seems like it was only yesterday when Lady Gaga burst on the scene, immediately letting us know that she was here to stay. She certainly wasn’t going anywhere, and some seven years later, she’s still proving that every single day. I admit that I didn’t quite know what to make of the Lady at first. We really hadn’t seen a musician quite like that in awhile, had we? But then I heard one of her little ditties and I was moved, to say the least. It had such a profound effect on me — and still does to this day…

To say this is a good song would be an understatement. It’s so much more than that. It’s the song — the voice — of an entire generation. It speaks to everyone who’s ever felt different, who’s ever dared to forge their own path and who is brave enough to stand up and say, “No, I don’t want to belong. I want to stand out. Forever.”

There’s nothing wrong with loving who you are
She said, “‘Cause he made you perfect, babe
“So hold your head up girl and you’ll go far,
Listen to me when I say

I don’t know where we pick up this message, but somewhere along the way, we get this idea in our head that it’s a bad thing to love yourself. We think it’s seen as vain or conceited; there are so many negative connotations here, aren’t there? For so long, we’re scared of what people will say or what people will think if we even show just a little bit of pride in ourselves. The horror! The shame! It. Must. Be. Avoided.

Emotions can be so fickle and fluid sometimes, can’t they? They’re up and down, that’s for sure, but eventually, you get to a point where you are able to grab that self-confidence and never let it go. You finally realize that you deserve it and you own it — for, perhaps, the first time in your entire life. It’s a form of self-liberation that I can’t really describe, but I know that I’ve never felt anything remotely like it in my entire life. It’s almost like you’re able to shake yourself of a weight that’s been pulling you down for far too long. You’re not going to be a prisoner to it anymore, so you metaphorically throw it into the ocean without looking back. 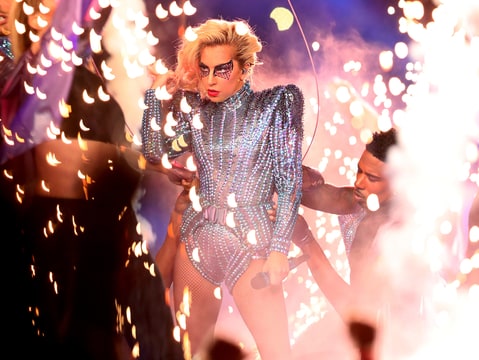 As I was watching Gaga’s brilliant performance on Sunday, I kept thinking how cool it would be if I just breezed down the street in my bright red wheelchair — you know, just singing this song. Or maybe lip-sync. I have to capture the grit of her voice, of course. Seriously, though, in these trying times lately, we need a hero. Gaga is stepping up and I’ll gladly follow her any day! xoxo