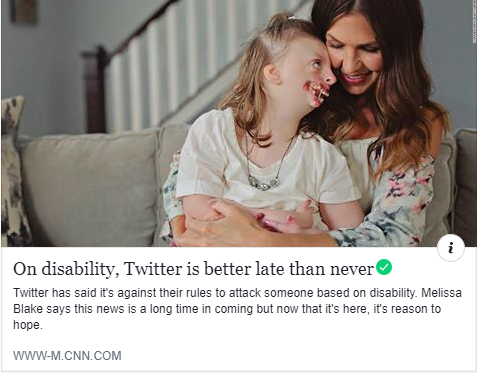 Yes, I know, it’s another timely essay from me!! But when there’s a win for the disability community, of course I’m going to write about it! Twitter finally updated its reporting form to include hate directed at people with disabilities. I wrote about this long-overdue milestone and the importance of including disability in conversations about hate speech. So excited to see it published on CNN, which is quickly becoming my favorite site to write for!

You’ve all seen me lamenting about Twitter trolls, which seem to be on the rise more and more every day. It’s sad, really, and it can feel like the vicious vitriol knows no bounds. That’s why I’ll be forever grateful to the work and perseverance of Natalie Weaver, the amazing woman who called on Twitter to revise its reporting form after her daughter’s photo was used in an offensive tweet promoting eugenics.

Here’s an excerpt of the piece, which made me realize how revolutionary and groundbreaking to be able to say, “YES, ableism is a form of hate speech!“…

When we think of hate speech and what sorts of things constitute hate speech, we automatically think of racism and LGBTQ issues. What we don’t automatically think of are things like ableism and discrimination against people with disabilities, which are rampant in society, to be sure, but sometimes get overlooked. Consider the flippant use of the “R” word — and even a seemingly less offensive word like “cripple.” Even Disney villains usually have some sort of facial deformity, which sends the message to children from a young age that disabilities are bad and that people with disabilities are evil or monstrous.

Disabilities may make people uncomfortable. I’m sure my disability and my wheelchair has made people uncomfortable in the past. But that doesn’t give people the right to use it against me and vilify me for it. Twitter’s change in policy gives me hope. Hope that perhaps, finally, we’ve moved the needle of dismantling centuries of negative misconceptions surrounding people with disabilities. We’re not monsters. We’re people. And we’re not going anywhere — on Twitter and in real life.