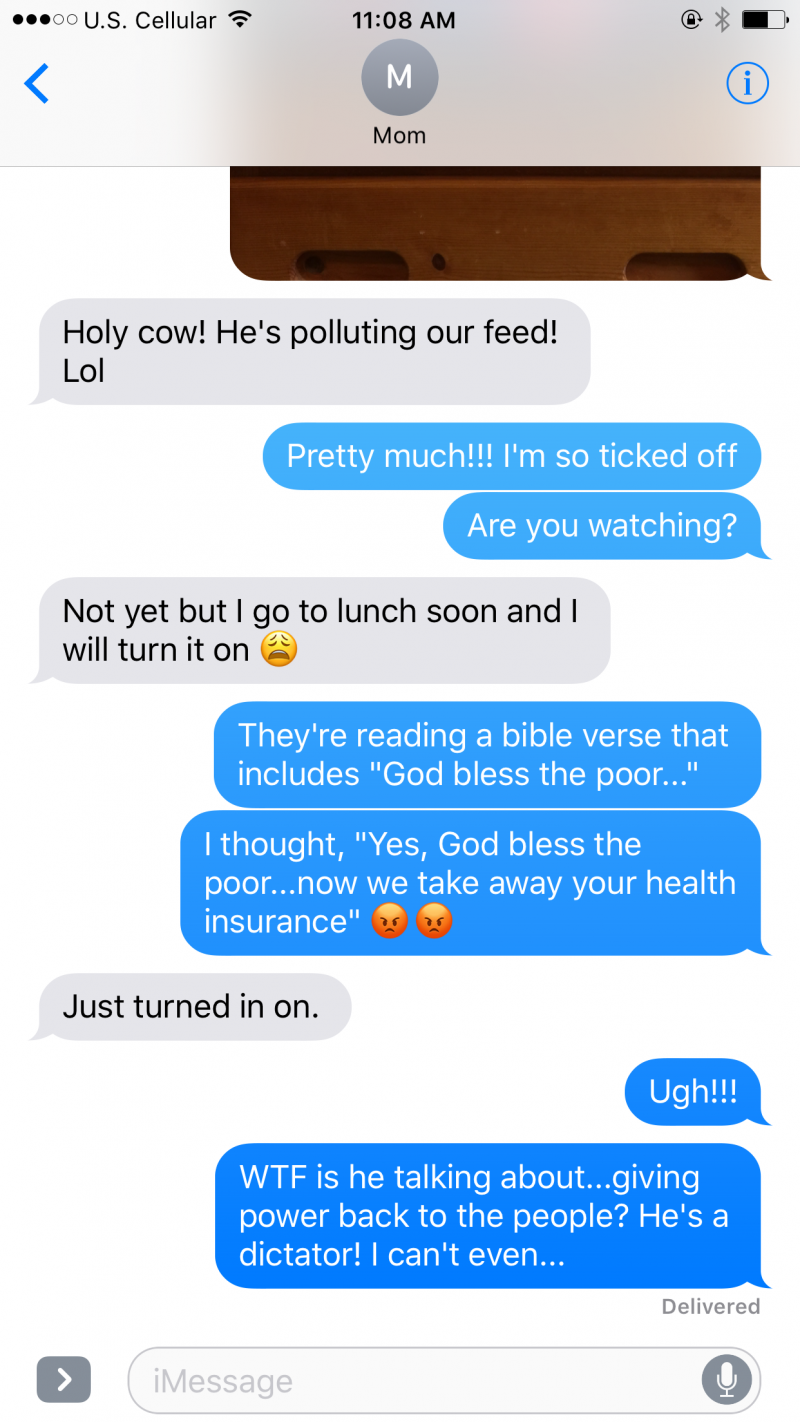 Editor’s Note: I found this old column I wrote NINE YEARS AGO!!! It’s about the early days of texting — you know, back in the Stone Age when people were still switching over from flip phones and everyone thought Blackberries were the wave of the future? Yeah, that long ago. Anyway, thought it would be fun to post a little ode to that time I was an awkward texter today! Hope you enjoy it, friends!

P.S. Yes, the above is an actual text exchange with my mother…you can probably guess what I was watching last Friday that got me so steaming mad!

No, that is not some updated version of Morse code, though it is a code of sorts. Those abbreviations are the hippest batch of phrase crazes to sweep the nation since the ‘groovy’ and ‘outta sight’ days.

The only difference is that these phrases are rarely, if ever, uttered by the human voice. It’s all done over a scary, spooky world known as text messaging.

It’s really quite a sight to behold, actually, the dance they do with these new, hip words. Dare I say this new trend even rivals the old-time dances such as the Twist and the Charleston? The only difference is that instead of using an arm, a leg and maybe a touch of hip action, another body part is getting all the action, its very own calisthenic workout, if you will. The hands. More specifically? The thumbs. They move, zigzag, glide and shuffle over those cell phone and Blackberries with the ease of someone whose thumbs are quadruple jointed. It almost looks unnatural.

The Fastest Thumbs in the West, I call them.

Just look around and you’ll see them everywhere. People walking on the street. People sitting on a bus. People shopping. People lying in bed. People even doing it while talking to you — and yes, you multi-tasking people, you know who you are.

So naturally, I can’t help but feel left out. Yes, of course I have a cell phone (it’s new and pretty and blue), but I’m old-school with it. I only use it for its original purpose: calling.

Now, before you draw your conclusions and make your judgments about my sheltered existence, I do have a defense. If I did vow to text like there’s no tomorrow, the sad truth is that I’d have virtually no one anxiously waiting on the other end of those messages. No boyfriend to write mushy notes to. And considering the fact that I go to bed at 8 p.m. most nights rules out the possibility of texting friends for a bar-hopping night of fun and merriment. 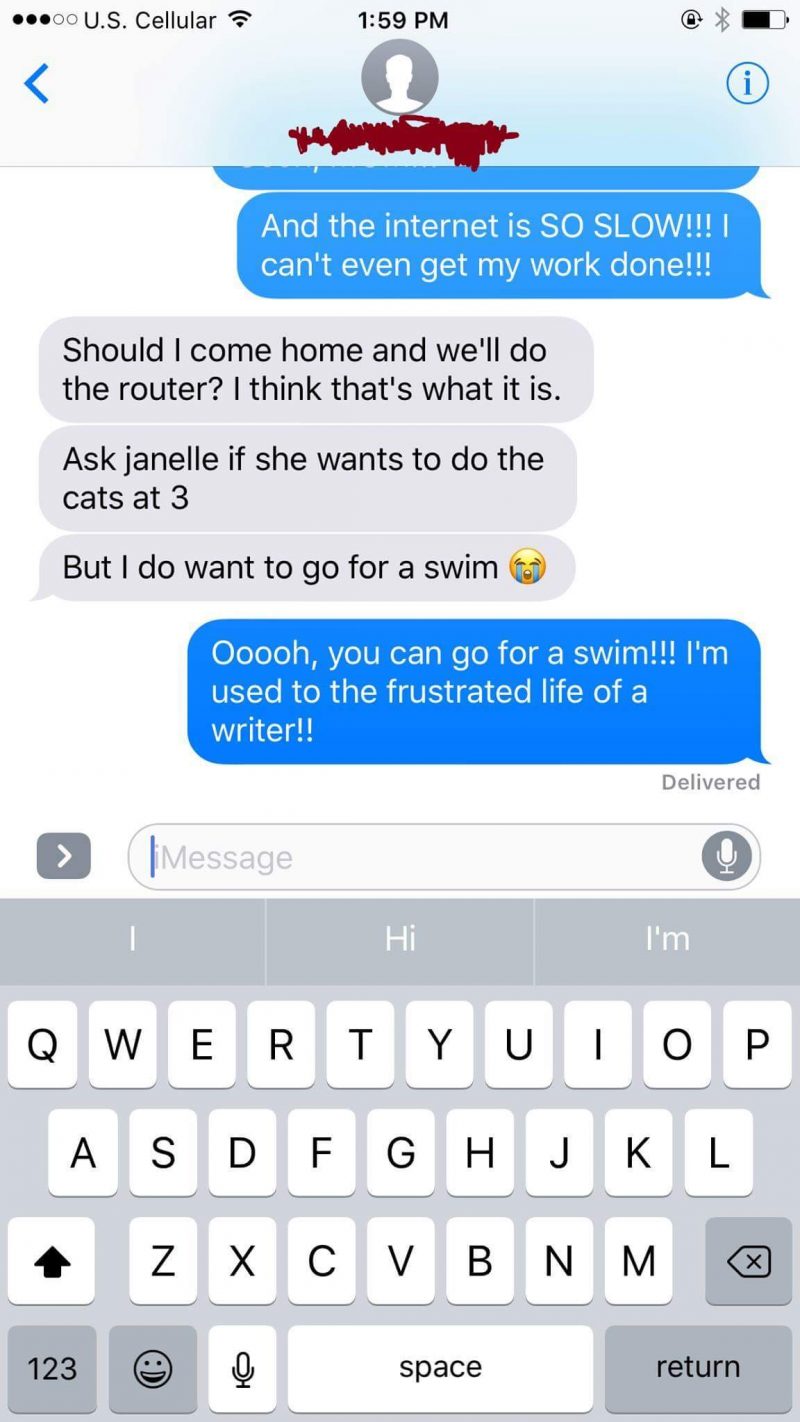 I could text my family. In fact, I’ve tried. I texted my mother one time and instead of praising me for sending the first text EVER in my life (I was 24 or 25 at the time), she proceeded to rant about how much it will cost.

“Don’t do that ever again,” she said.

And so far, I haven’t. Oh wait, there was that one time last month that I texted my sister this message: “I am watching you” for fun. Apparently she didn’t recognize my cell number because the message freaked her out.

Do you see a pattern here? I’m a horribly awkward texter. And I’ve only done it twice. And anyway, it’s not like I’d have anything of importance to say in these texts. I imagine my messages would look something like these:

Hey Mom. I just woke up and wanted to say hi.

Hey Mom. I just got out of the shower and was worried I’d missed your text.

Hey Mom. I just got to work.

Hey Mom. I just had the best lunch ever: tuna!

Hey Mom. Can you buy me some Juicy Juice?

See, it’d be an hourly log of my day-to-boring-day life. I’d eventually (probably the same day) run out of things to say, err, type. I’m pretty weak physically, so my hands and thumbs would probably be sore too. I’m thinking I’d have to soak them in hot water that night.

Maybe that’s OK. Maybe I — and perhaps you few other folks out there — simply need to realize we’re not the texting type. There’s no shame in it, really. Maybe texting, like the Twist, isn’t for everyone. We shouldn’t feel bullied by those with a fast thumb who know how to use it, should we?

So the next time someone tries to pressure you, saying you’re a texting virgin, give ‘em the thumbs up. Show your bare thumb proudly! At least your thumb will be smoother than theirs.

Update: My gosh, how times have changed over the years. Now, I’m a full-on texting addict. OK, maybe that’s a bit of an exaggeration, but at the very least, I’m in too deep to ever go back now. I know too much. And I’ve texted far too much. Maybe you’re the same way? Here’s to us…it’s a crazzzy texting world out there! xoxo