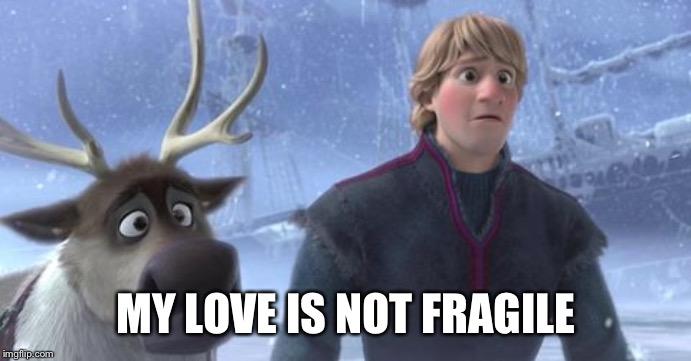 As I mentioned yesterday, there’s A LOT going on in Frozen 2 — even beyond the powerful statements about sisterhood. Case in point: The adorably sweet and lovable Kristoff. The portrayal of his character and how he presents healthy masculinity is such a groundbreaking Disney first and it’s so important that we keep talking about it, even long after the movie is gone from the theaters.

First, though, I must admit something: I didn’t pick up on this right away. Don’t get me wrong — I’ve always loved Kristoff, with his sheepish grin and boyish nature. Plus, did you know that he was raised by trolls?? How cool is that?? Like I said, there’s a lot to love about this guy. But as I sat in the theater, I was so focused on Elsa and Anna and completely absorbed in their sisterly love, so I think I overlooked Kristoff’s storyline. Or maybe I just passed it off as not that important??

Well, friends, I’m here to tell you: His storyline IS important! It’s so important. And the fact that this is a Disney movie makes it even more meaningful. We’re so used to the typical Disney trope: Damsel in distress. Dashing prince on horseback gallops up and saves her — and saves the day in the process. The prince is deemed the hero and everything is happy for all eternity, but usually not before there’s a snag or two — namely, the princess strolls about singing some catchy but morose song about how she doesn’t know how said prince feels about her and how she has no idea where their relationship is going.

Yet in Frozen 2, it’s Elsa and Anna who are the heroes. They’re the ones who are in charge and saving the day on their own. They don’t need a prince at all. So here we see Kristoff being the one left behind to do the pining and pondering. In fact, he sings a monstrous ’80s-inspired power ballad about his feelings. 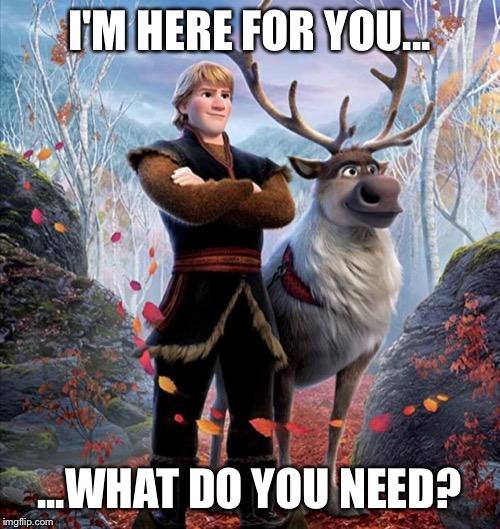 Singing about his feelings. His genuine, honest, vulnerable feelings and, well, it’s AMAZING to see him not holding back in any way. He isn’t afraid to talk about his feelings. He’s not afraid of being seen as a “weak” man. And he certainly isn’t too prideful to put it all out there.

And all throughout the film, he’s the one selflessly supporting Anna with key lines like…

Do you see just how powerful this is? In a world that is still dripping with toxic masculinity — those dangerous things we teach boys about what it means to “be a man” — here’s Kristoff essentially rejecting all that. In its place, he gives us a new version of masculinity — one that is healthy and evolved and every mood that we need in 2020. He’s Elsa and Anna’s equal; instead of trying to save them in the epic battle, he’s fighting alongside them.

That is the definition of a real man. I’m telling my kids that this is healthy masculinity. Men being vulnerable is sexy. Men talking about their feelings is sexy. Men sharing their emotions is sexy.