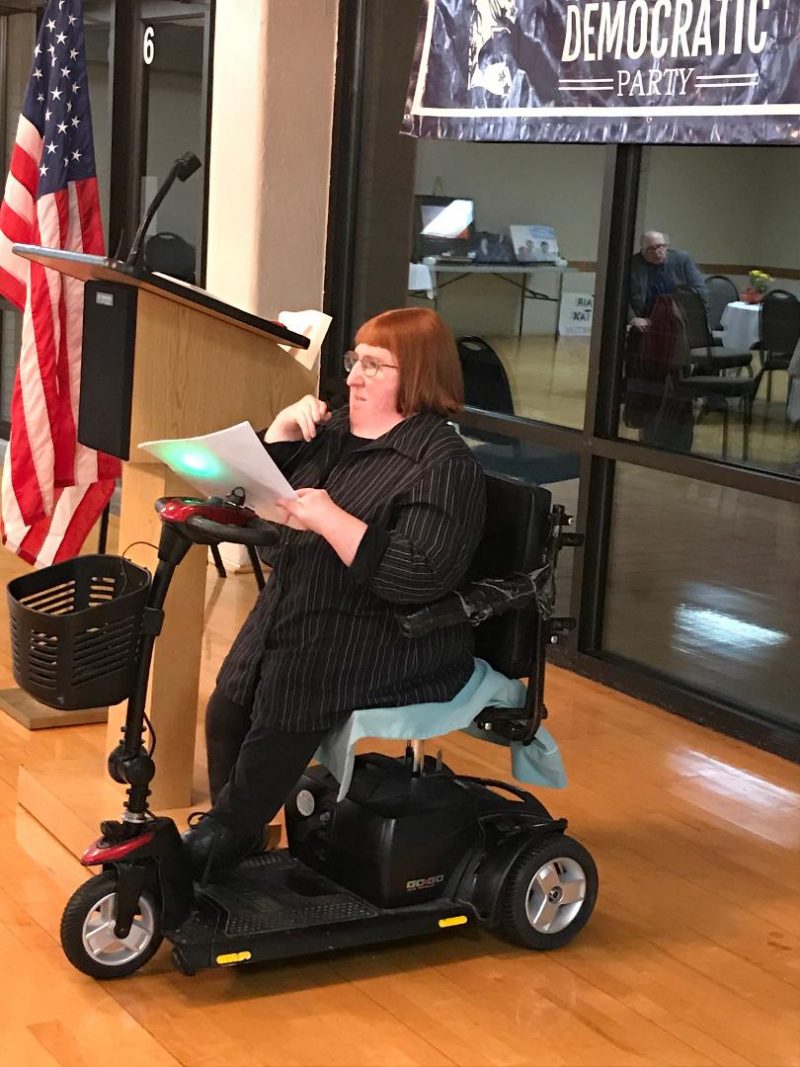 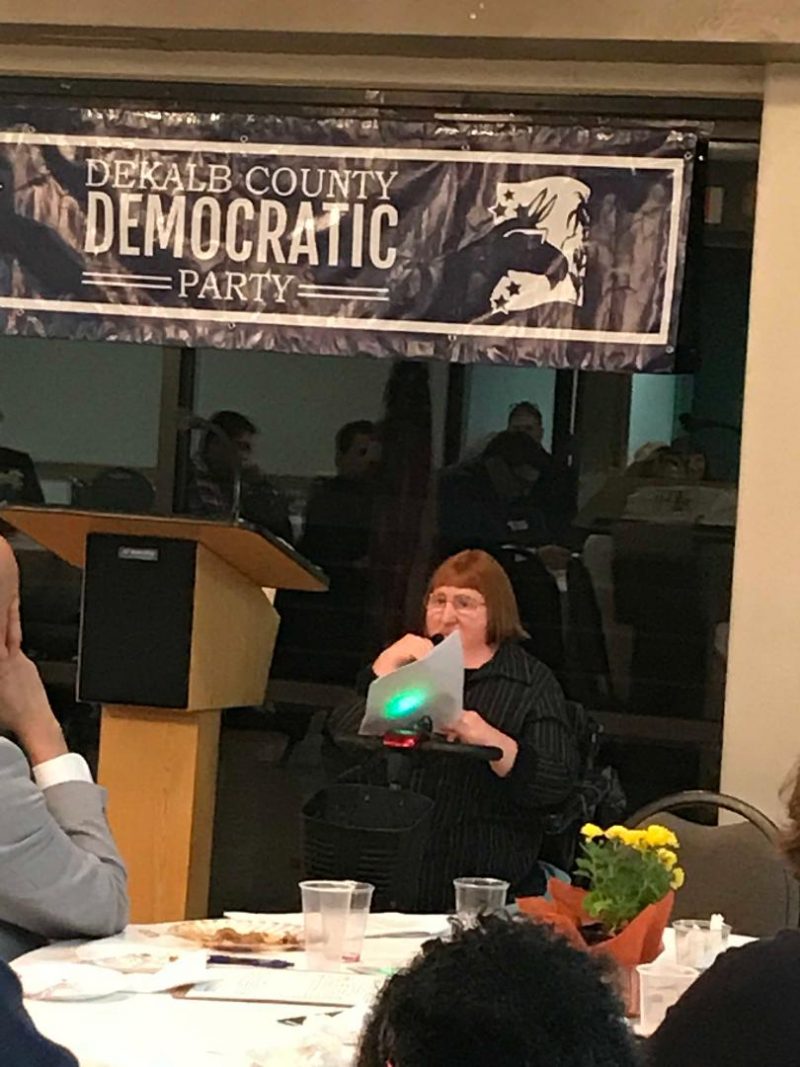 As of last Thursday, to be exact.

The local Democratic Party asked me to give the keynote address for their annual dinner and I was beyond honored. I was excited to talk about my recent viral tweet, my career as an op-ed writer and how I’m speaking up in the age of Trump. It was my first political speech!

In fact, that was literally the title of my speech: “Speaking Up In the Age of Trump.” And while I didn’t know what I wanted to say at first, the minute I sat down at the keyboard, the words just seem to pour out pretty quickly.

Plus, the speech itself? It wasn’t nearly as nerve-wracking as I thought it would be. Once I rolled on up to the mic, the anxiety went away!! Maybe it’s because I was channeling the great Elizabeth McCord from Madam Secretary? I mean, she can go to political battle with the best of ’em, if you ask me!

Hello, everyone! Thanks so much for coming out tonight! I want to thank Kori and Mark for inviting me to speak here tonight. This is my first speech at a political event, but don’t worry, I’ve been binge-watching CBS’ Madam Secretary” which follows the career and life of fictional Secretary of State Elizabeth McCord, and I’ve been taking mental notes on the art of giving a good speech. I just hope I can live up to Secretary McCord’s awesomeness!

If you follow me on social media (or read The Daily Chronicle), then you know that I’ve had quite a busy month. In early September, I posted a tweet in which I stood up to some nasty internet trolls and that tweet quickly went viral. The response has been overwhelming and exciting in the very best way possible, but more than anything, the response has been completely unexpected. I didn’t think it was anything extraordinary at the time to clap back at the bullies. After all, speaking up and speaking my mind is something I’ve been doing all my life.

But let me back up a little first. I was born with Freeman-Sheldon syndrome, a genetic bone and muscular disorder; I’ve had more than 25 surgeries on my knees, hips, hands and spine and spent much of my childhood in and out of the hospital and doctors’ offices. Outside of the medical world, though, I was just me. Melissa. And I credit my parents for giving me as normal of a childhood as possible and raising me to be strong, determined and, yes, VERY outspoken. 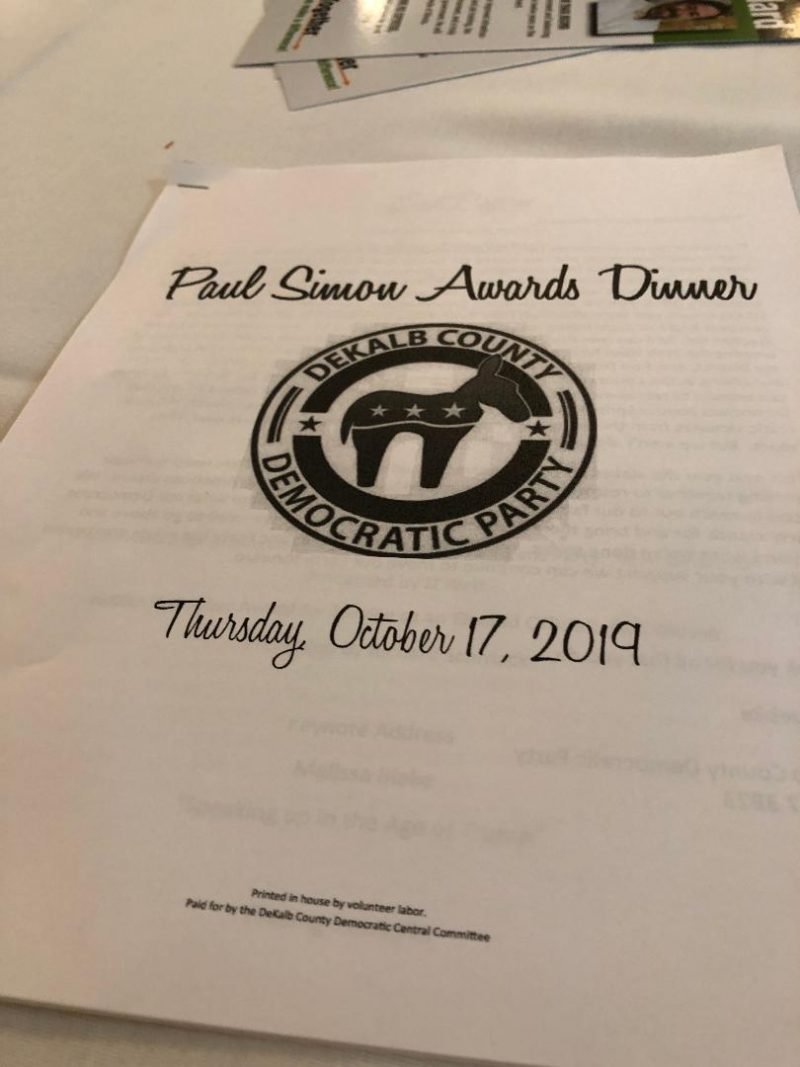 I’ve been a lifelong DeKalb resident – born and raised here. I graduated from DeKalb High School in 2000, got my Associates from Kishwaukee College in 2002 and then my Bachelors from NIU in 2005. It was while in school that I fell in love with writing – and, specifically, journalism. The experience I gained on both the Kish student newspaper, The Kaleidoscope, and NIU’s Northern Star was invaluable and only confirmed that, yes, journalism was indeed the career for me. In fact, I loved The Kaleidoscope so much that nearly a decade after I was a student, I came back as adviser, where I loved teaching the journalists of tomorrow the ins and outs of the business. As I always say, my job description was “to mold future Bob Woodwards” and that’s a responsibility that I never took lightly.

Although I worked as a copy editor and reporter on those college newspapers, it was op-ed writing that I loved the most. Interestingly, my mom even wrote that very thing in our family Christmas letter in 2001 – that I’ve found my niche in opinion writing.

And, boy, was she right. Since graduating college, I’ve built a career as a freelance writer with an emphasis on op-eds. I’ve written 21 op-eds for CNN as well as pieces for NYT, WaPo, WSJ, The Week, Glamour and Cosmo.

As you can imagine, the current administration has given me plenty of material to work with. In fact, it was an op-ed about Trump that inspired my viral tweet. After I wrote a CNN op-ed in August about why we should all unfollow Trump on Twitter, a conservative YouTuber mentioned me in one of his videos, calling me a “so-called journalist” – a moniker I even considered putting in my Twitter bio out of spite. I made the mistake of reading the comments on that video, even though I knew better! And sure enough, all the comments were about my appearance instead of my words. Apparently, I was fat, ugly and looked like a blob fish. The worst, though, was the comment that I should be banned from posting photos of myself.

I learned pretty early on that being a woman writer, especially one with a disability, was going to open me up to trolls on the internet. People respectfully critiquing my work has never bothered me. Instead, what’s bothered me the most is people going right for attacking my appearance; No mention of what I wrote…just making fun of how I look.

So after the op-ed went up in August and I saw those comments, I knew I wanted to respond in some way. If anything, I wanted to show those trolls that they weren’t going to get the best of me. One night in early September, I tweeted three photos of myself, along with this caption: “During the last round of trollgate, people said that I should be banned from posting photos of myself because I’m too ugly. So I’d just like to commemorate the occasion with these 3 selfies…”

It was my cheeky, defiant way of saying, “OK, you don’t want to see my face? Well, then, that’s all you’re going to see…times three!”

I wish I could say that the comments from the trolls surprised me, but, honestly, theirs is a reaction that I’ve come to expect. We have someone in the White House whose very MO is to bully, belittle and demean, especially women. He’s normalized this behavior – the behavior of a schoolyard bully – and so I think a lot of people, especially his supporters, see that and think it’s OK.

Do I think those trolls will ever see my tweet? Probably not. But maybe that’s not really the point. Maybe the point was to do it for me and for other people who experience any kind of bullying, whether online or IRL. And, WOW, have people sure responded to my tweet. I’ve heard from people all over the world – in Brazil, England, the Netherlands, Australia – and they all told me how much they relate to my tweet and how much they appreciated it.

I’m so glad that my tweet sparked a conversation because over the last month, I’m realizing more and more just how powerful speaking up can be. And that’s exactly what we need as we move closer and closer to the 2020 election. We need people to speak out – against injustice, against racism, against homophobia, against antisemitism, against the unraveling of this country at the hands of Trump.

The ideals of the flag have not held up for everyone. We continue to see this every single day and we have a duty to work toward the ideals set forth by our Founding Fathers, who I often think are rolling in their graves right now. Trump is fond of saying things are unpatriotic. Taking a knee is unpatriotic. Criticizing the government is unpatriotic. The press is unpatriotic. But the very act of protesting is about the most patriotic thing we can do as Americans; it’s what this country was founded on. In the 1700s, Colonists protested against English tyranny. Since 2016, we’ve been protesting the tyranny of Trump and his administration’s policies that are hurting so many people. 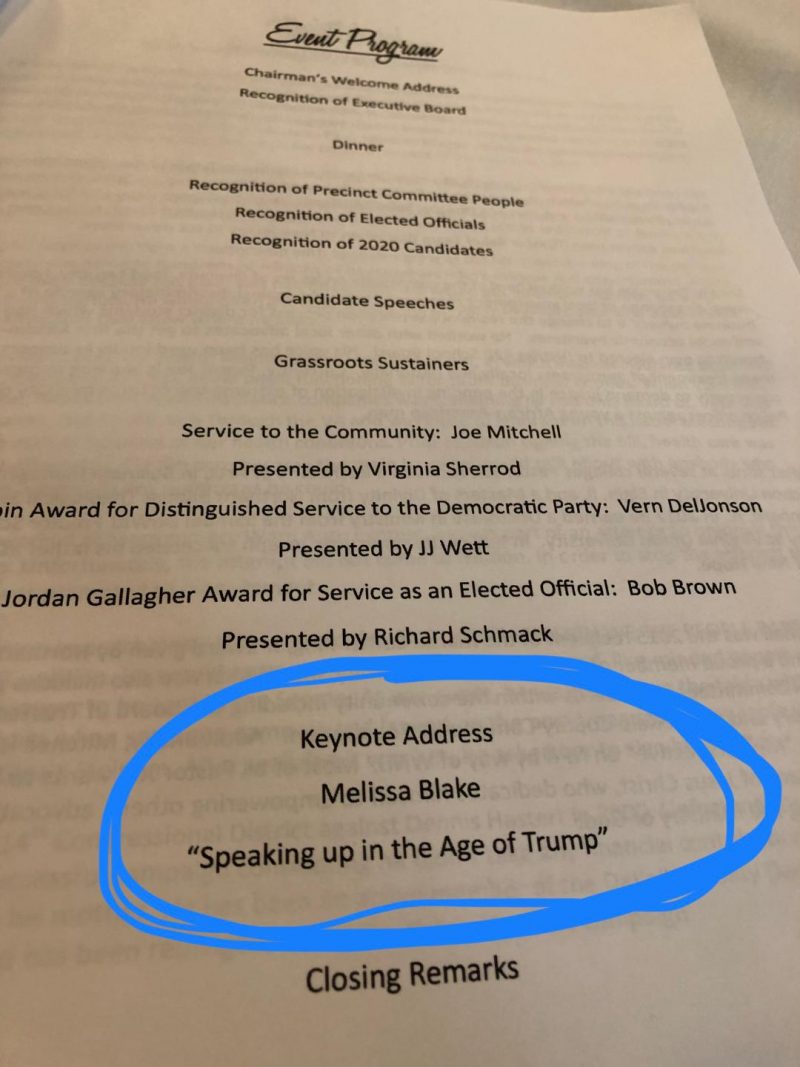 So often, women are told to be quiet. They shouldn’t rock the boat. They should just sit there and be likeable. Any time we see an outspoken women, we label her aggressive or mean or, in Trump’s own words “a nasty woman.” We have so many negative connotations with women who are forthright and aren’t afraid to speak their minds. Two years ago, during my first round with internet trolls, someone on Twitter even bestowed me with my very own nickname when I “dared” to push back against the patriarchy.

“You purveyor of matriarchy,” they tweeted, probably thinking that it was the greatest insult ever.

But you know what? I took it as ANYTHING but an insult. Instead, I took it as the biggest compliment I could ever receive and ran with it, even having an illustration done of me with the words “Purveyor of the Matriarchy” across the top. That illustration sits prominently as my cover photo on social media and, honestly, I couldn’t be happier or more proud to live out that title every day.

“There will be those people who say that I shouldn’t say anything, that I’ll never be able to change people’s minds. They’ll caution me not to rock the boat or make too big a deal of things. And to those people, I say this: What if you had said that to Susan B. Anthony during women’s suffrage or to Rosa Parks during the civil rights movement? What if you had told them they shouldn’t be so outspoken? And what if they’d listened?

We’d no doubt be living in a very different world. I shudder to think what humanity would be like, don’t you?

Because every time we choose silence over speaking up, that line of normalization widens the circle just a little, as if to say, ‘Yes, this behavior is perfectly acceptable.’”

Among the emails that came pouring in after my tweet went viral (and trust me, it was so nice to receive nice emails from people instead of the nasty emails I’ve gotten in the past), I received one just a few days ago from a woman named Jami.

I was so moved by her words. They show exactly why I’ve always spoken up. And why I’ll continue to speak up.

Indeed, women who dare to make waves are powerful. And come November 2020, let’s make sure those waves are blue, blue, blue!

Seriously, though, it was such an inspiring and uplifting evening!! I was truly honored to be a part of it and see our democracy in action! 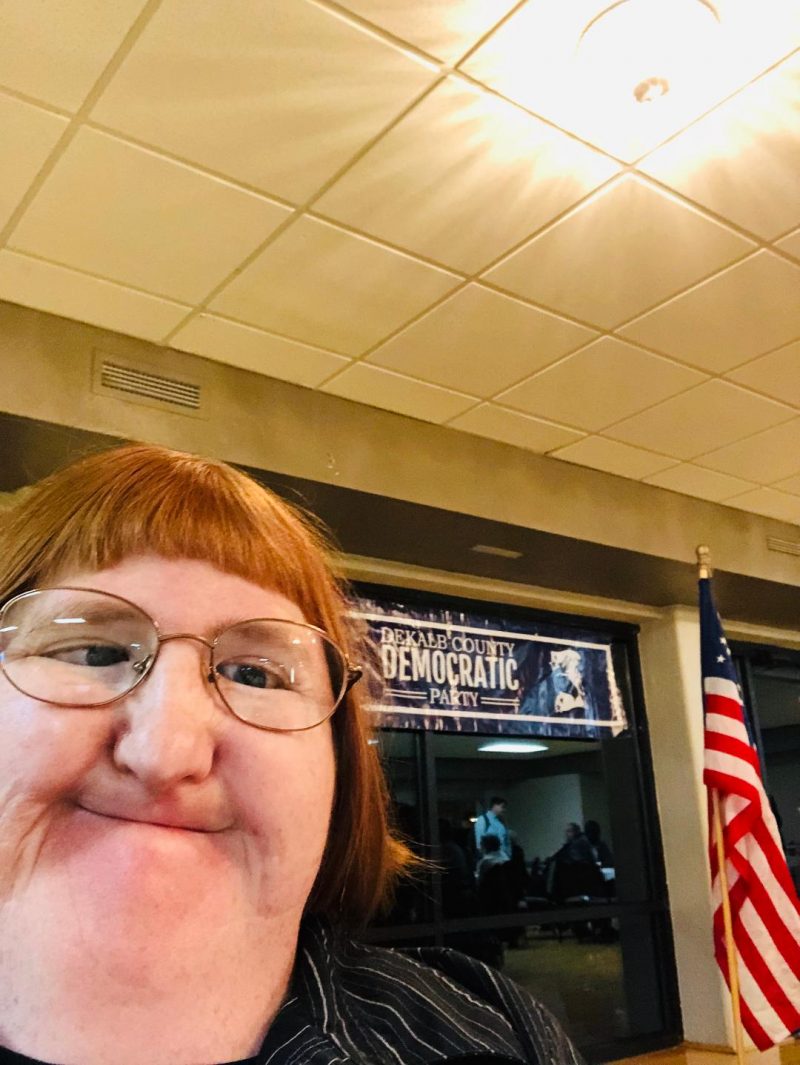 Some of you asked if I took a selfie during my big speech evening!! The answer??? OF COURSE I DID. Don’t y’all know me better than that by now?? I snapped this photo just after we arrived and tried to capture the political decor. I still can’t believe I got to do this!!

How do you get involved in our democracy and political process, friends? I’d love to hear all about it, so feel free to tell me about all the ways you’re making a difference!! I love you!! xoxo