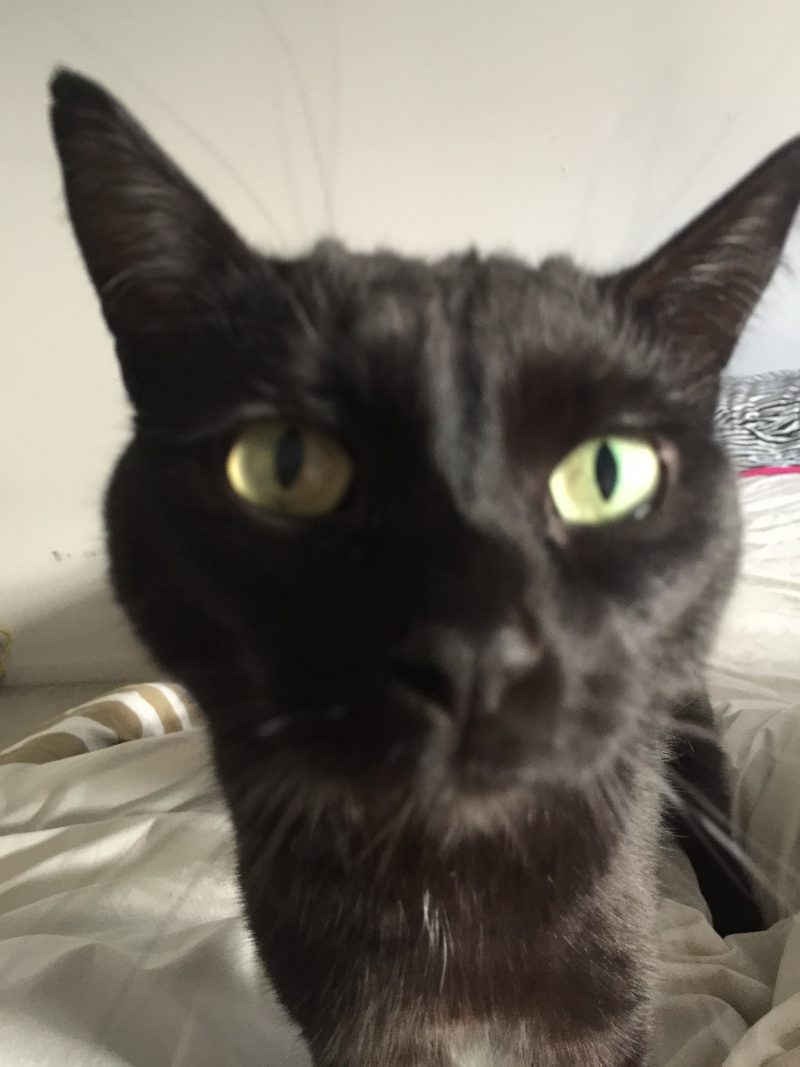 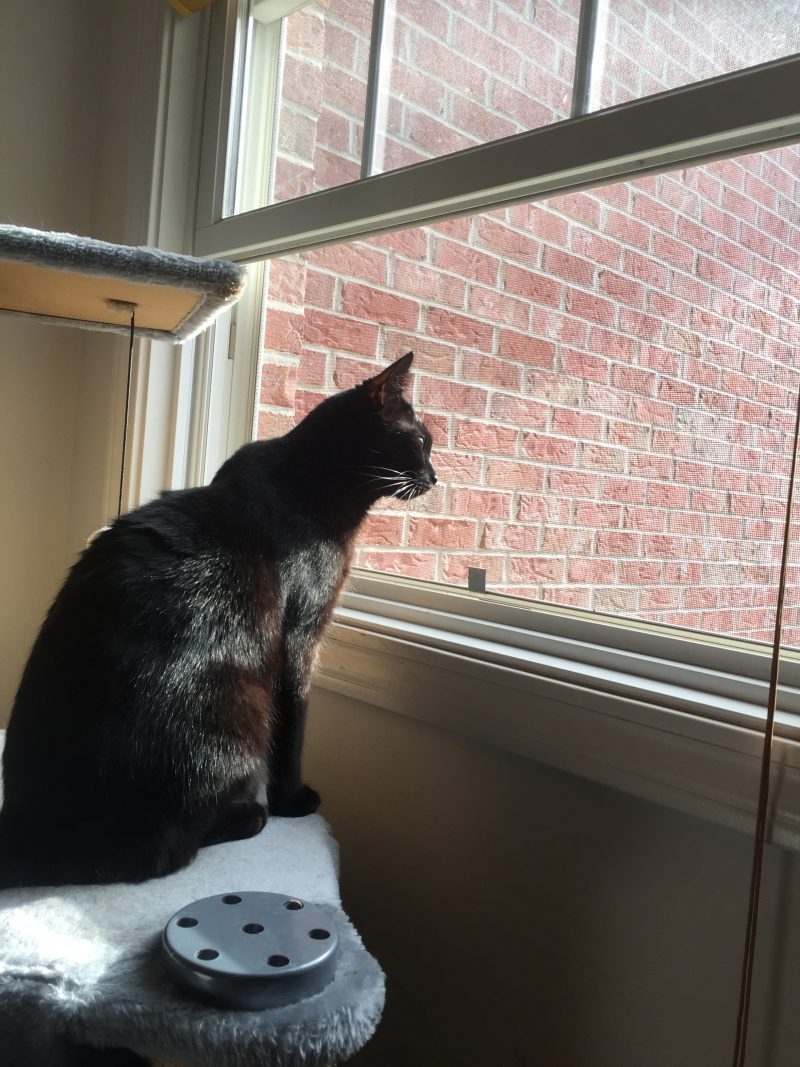 So this blog post is a long time coming, friends!! After Harry died in April, we didn’t know when we would be ready to welcome another cat into our home and our hearts. Harry was such a special creature and there truly was no kitty like him; I know everyone says that about their pets, but Harry was a magical creature! We knew that we would get another cat eventually, but we didn’t really put any kind of timeline on it. And then, after my mom and Janelle went to the local animal shelter ONE TIME, Janelle made the decision for us. That’s how, one afternoon in May, little Whitney found herself scampering all over Janelle’s room — and right into our hearts.

Yes, this little bundle of goodness and fur has been a part of our family for two months now! We never planned on getting a black cat, but Janelle said she felt a connection with Whitney the very first time she and my mom visited the animal shelter. My mom wasn’t convinced, but when Janelle went back by herself a few days later, Whitney jumped right into her lap and as the saying goes, the rest is history!

(Full disclosure: My mom fell in love with Whitney once she arrived!) 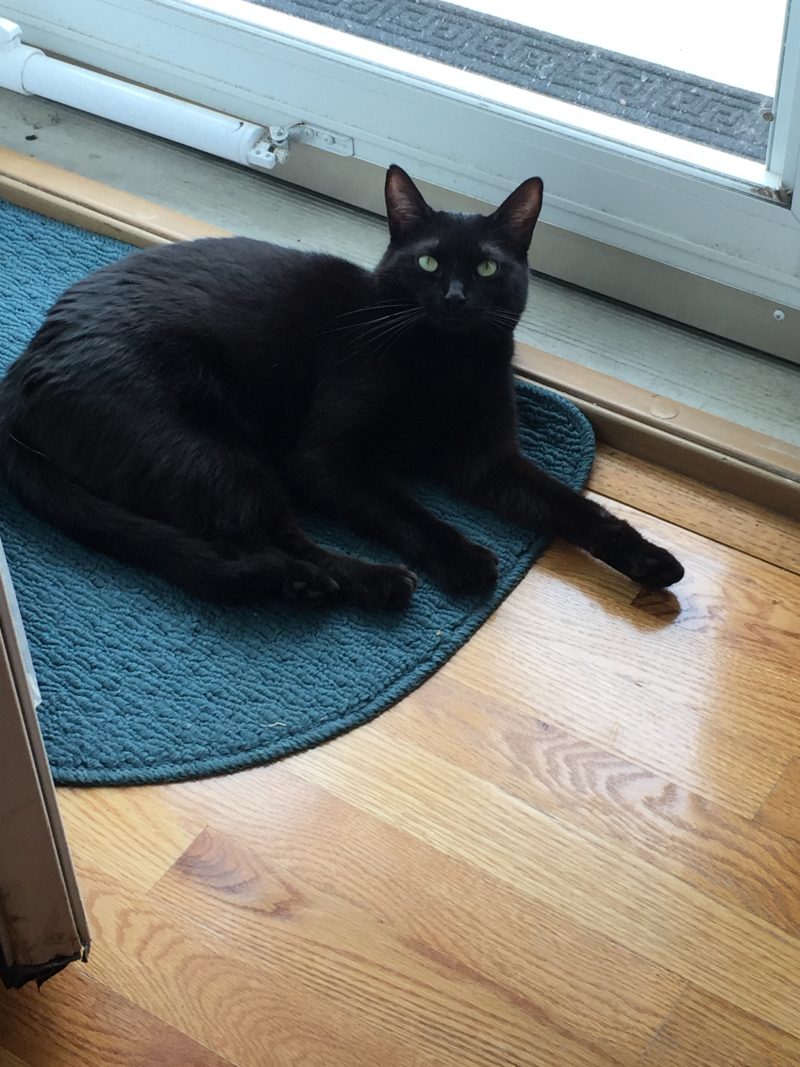 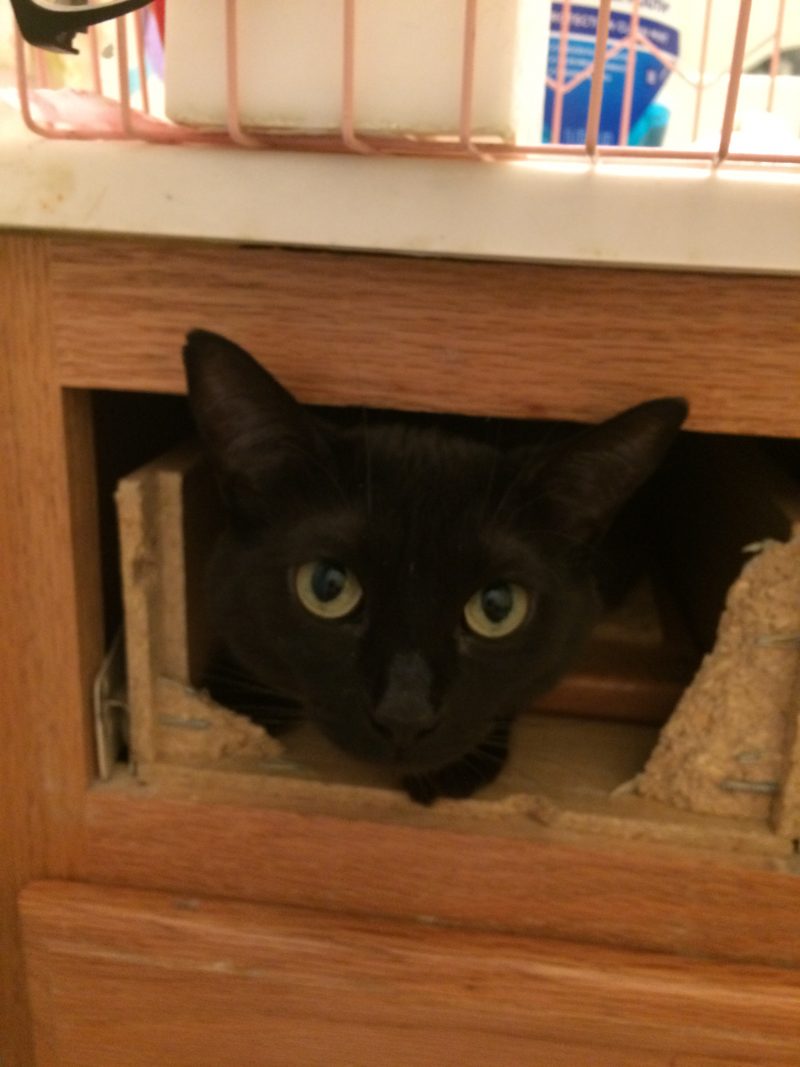 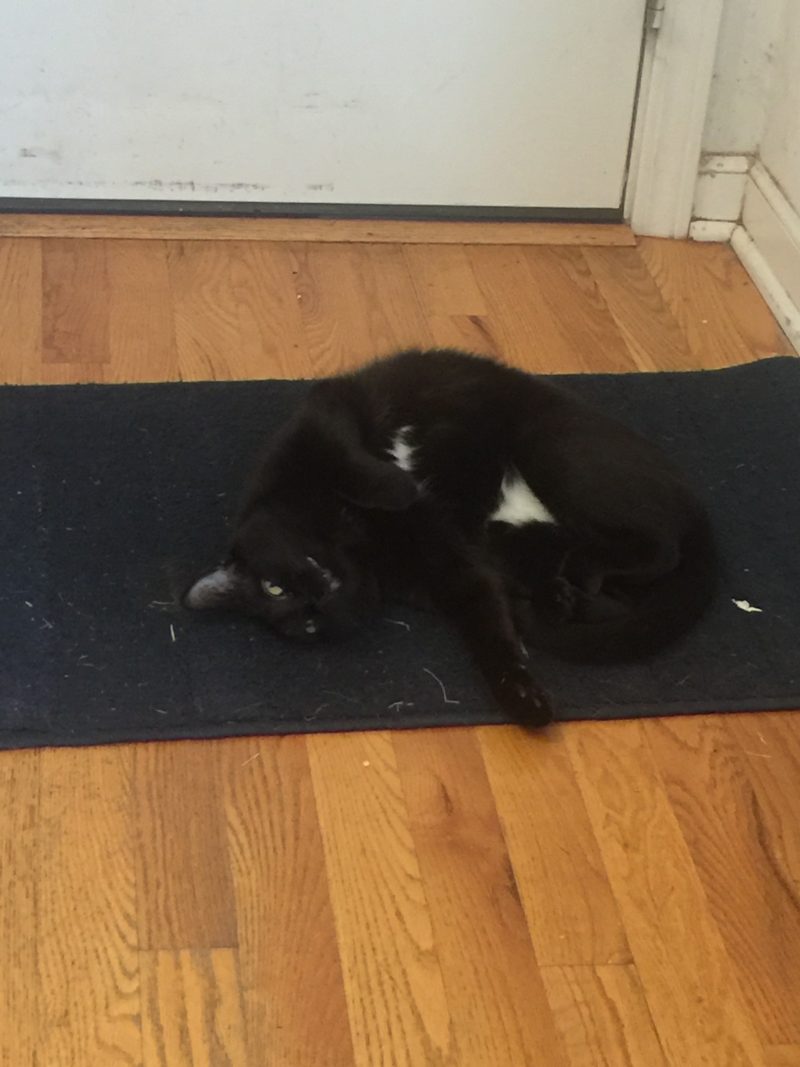 Anyway, like I said, the rest is history, which is exactly what we’ve been doing for the last two months. We’ve been making our own history and memories with our new family member. In a word, Whitney is adorable. Sweet. Kind. Gentle. Curious. Well, I suppose that’s more than one word, isn’t it? But she’s just got so much purrsonality (see what I did there?) and it’s been amazing to get to know her and see her make herself at home with us.

Anyone who tries to tell you that all cats are the same has obviously never met one because cats are such unique, individual creatures. No two are exactly alike! Here’s what I’ve learned about Sister Whitney (that’s my nickname for her) so far, including some of her likes and dislikes…

• She’s curious — she’ll jump on counters, into cabinets and, with one mighty leap, into the recessed alcove above our fireplace. Fierce, isn’t she??

• She loves nothing more than a deep tissue massage and will show her appreciation by rolling on her back (shout-out to the cute white patch of fur on her stomach!)

• She’s a big fan of what Janelle calls the Pop Out Game, where Whitney will coyly hide under the bed, usually behind sheets that are draped over said bed, and wait for her prey. In this case, prey being Janelle’s ankles. The second Whitney spots said ankles, she proceeds to pop out her little black paw in a mad dash.

• She hates the birds, ever since she caught them sitting outside the window. I’m guessing she didn’t like their chirping because she immediately started chirping right back at them.

• We call her Squeaky because she lets out the tiniest little squeak when she wants to make her presence known.

• She loves my wheelchair. A lot. A few days after we brought her home, she just jumped up and sat on my seat like it was the most natural thing in the world.

• She prefers to spend her afternoons lounging on one of the rugs in our kitchen and just watch whatever we’re doing! 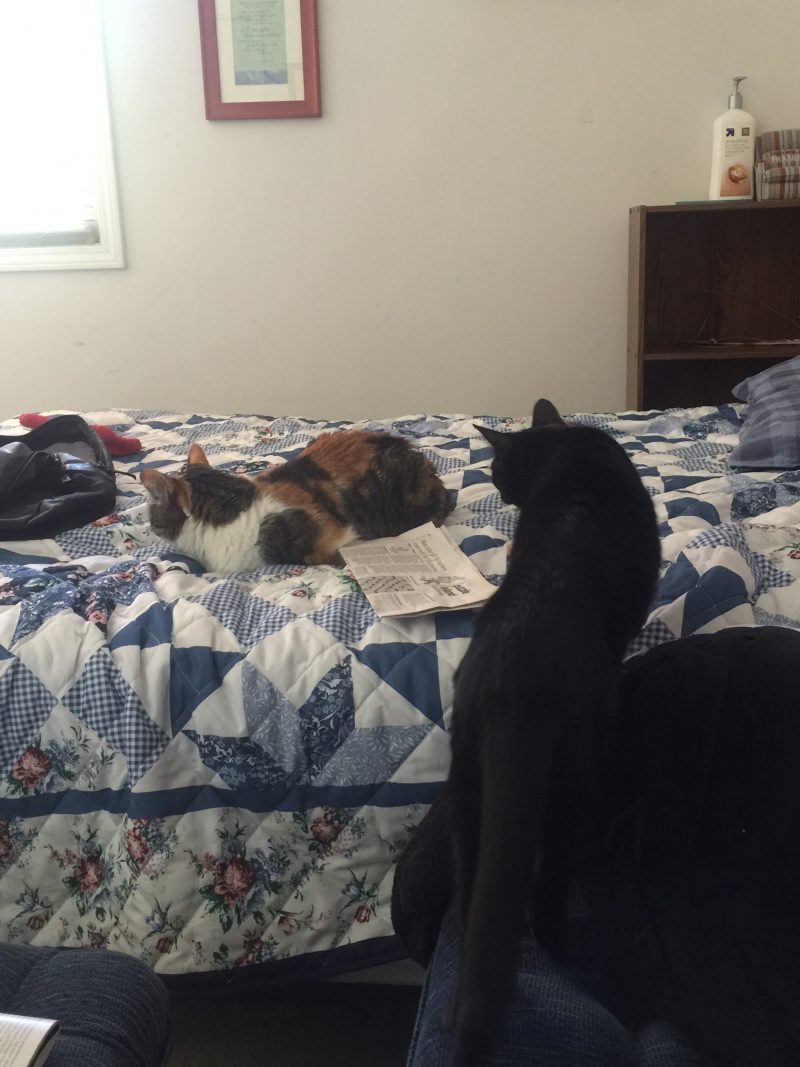 Whitney joins older sister Stella, who is a bit unsure right now, but I know these two will be BFFs in no time! You can tell Stella misses Harry so much and I never realized how much cats actually grieve until I saw that grief in Stella — more about that in a separate post.

Also, I just want to issue a formal apology to parents everywhere: Janelle and I took care of Whitney during the day as she was getting used to her new digs. What a fast and curious cat!! You can’t take your eyes off her!! I’m sorry that I ever questioned why parents can’t get anything done. I know why now! 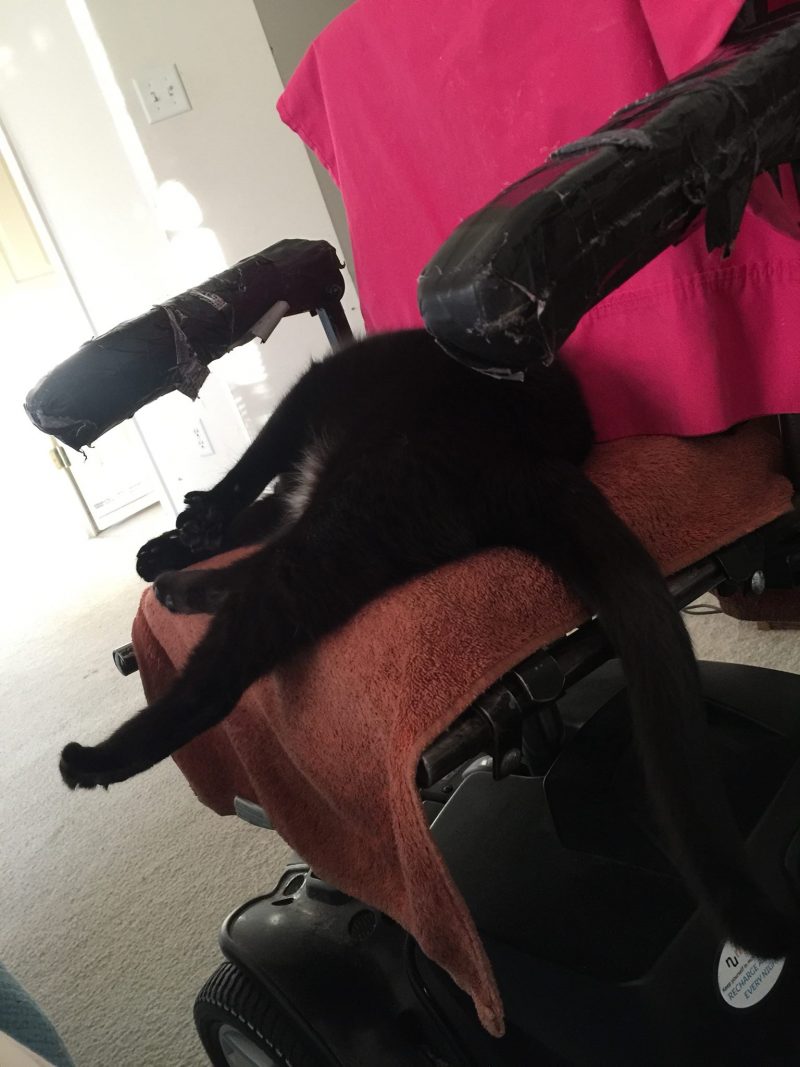 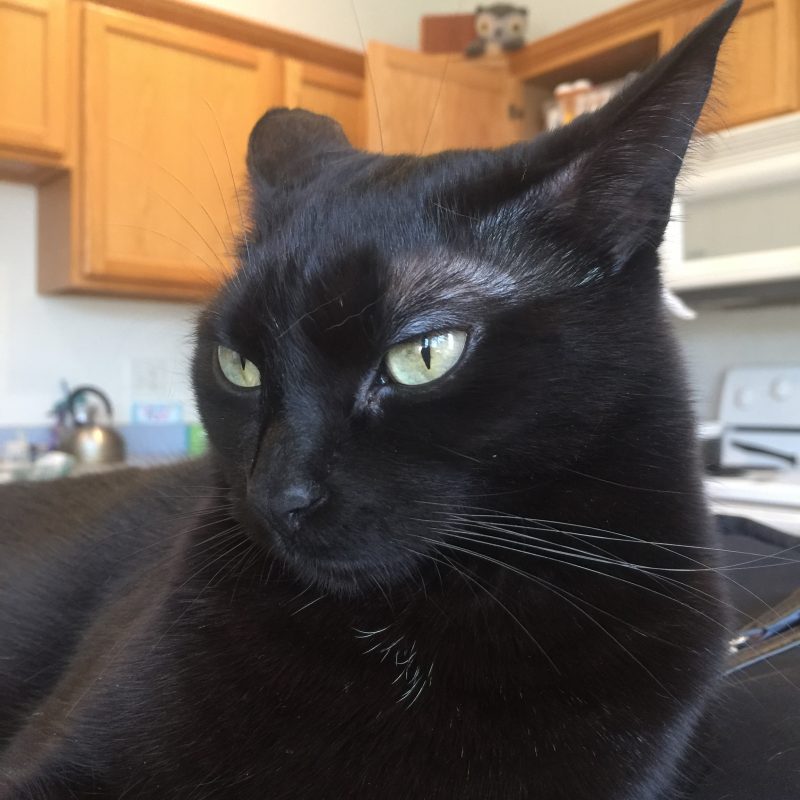 They say that black cats are unlucky, but this little lady has brightened our world so much in the last two months!! And, of course, I’m looking forward to all the memories we’ll make in the future. Welcome to the family, Whitney… xoxo