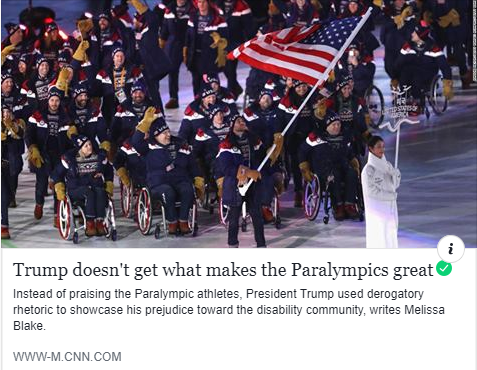 Last month, just when I was itching to write another timely op-ed, that guy who “lives” in the White House opened his mouth. Again. This time, he insulted the Paralympics. You know I’m going to speak up for the disability community. Again.

After Trump’s ableist comment about the Paralympics, I wrote an essay the very next day because I had so many thoughts swirling in my head and I just had to get all the words out.

I’m happy to say it’s on CNN Opinion! The editors even kept my snarkiest sentence in! My response to those defending Trump, saying he was referring to his time constraints when he said the Paralympics were “tough to watch“: “Surely he could skip a round on the golf course to support the fine athletes of Team USA.”

Here’s an excerpt of the piece, in which I stress that Trump’s treatment toward the disability community is something we all should be concerned with…

“Which is why to go from calling the athletes “incredible” to downright insulting them in the very next sentence is nothing short of dangerous. By saying it’s tough to watch, Trump is invoking that archaic stereotype that people with disabilities shouldn’t be seen — that they make people too uncomfortable to be out in public.

Indeed, Trump missed an important opportunity here to support people with disabilities. Now more than ever, we need positive representations when it comes to disabilities, and the Paralympic team is such a powerful force in the movement.

And speaking of Trump and CNN, he recently tweeted that CNN is “dead.” So, naturally, I tweeted him all of my op-eds with the hashtag #CNNIsAliveAndWell.

Dear @realDonaldTrump: Today, you tweeted that @CNN is dead. I know you don't deal in facts, but as a journalist, I'm duty-bound to report those facts. And the fact is, CNN is doing just fine! For example, here are 7 op-eds I've written for @CNNOpinion… #CNNIsAliveAndWell