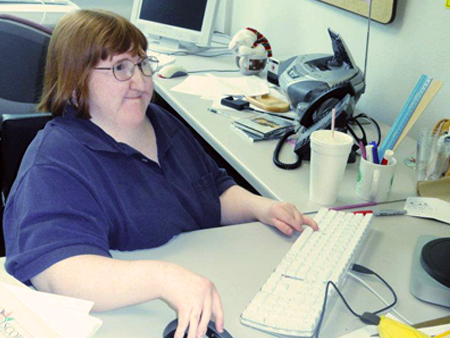 So! I’ve been thinking A LOT about this hashtag lately. I went from confusion to utter disgust over who supposedly said it (and let’s be real here…he probably did say it!) to sadness to just plain frustration. And then, like I typically do, I did some hard thinking on this very question: What does it mean to #DressLikeAWoman?

For me, this is what it means to #DressLikeAWoman — a strong, independent, self-assured woman who knows her own mind and isn’t afraid to speak it. That’s me, above, in my old office when I was a college newspaper adviser, and I think it perfectly captures who I am. At my desk, which is now our kitchen table, I feel fierce and in charge — like I can conquer the world right from where I am. I look at that photo and I remember feeling like I was standing behind a podium instead of sitting behind a desk. I could do anything and I could be anything. I wasn’t bound by any rules or codes.

THAT is empowering, don’t you think? That’s what we should be teaching young women — we need to be showing them that what’s most important is who you are, not what you’re wearing. We need to be empowering women instead of dogmatically telling them that there is only one acceptable way for a woman to dress — both inside and outside of the workplace. I mean, our president may choose to live in the Stone Age. It doesn’t mean that we all have to.

I also spent some time scrolling through the #DressLikeAWoman hashtag on Twitter and I’m SO GLAD I did. The photos women posted of them in their natural elements were real, honest and such a powerful statement of who they are…

How do I #DressLikeAWoman ?? I just put something on that DJT would never wear. pic.twitter.com/j3hdaxQPfY

I am an #actuallivingscientist, my coworkers and I use ultrasound to diagnose heart disease. We #DressLikeAWoman and save lives, too. pic.twitter.com/ohuNc2Up9D

Hi, I’m PhD engineer and #ActualLivingScientist. I study bamboo as sustainable construction material. On site I know how #DressLikeAWoman pic.twitter.com/zlupbgMVTM

I’m an epidemiologist improving surveillance of infectious diseases I #DressLikeAWoman and am an #actuallivingscientist pic.twitter.com/rQgMU0Und7

Hi, my name is Amina and I’m an #actuallivingscientist. I study the effect of cortical proteins on cell division & cancer. #DressLikeAWoman pic.twitter.com/n3xhDmDo46

So, friends, what do you think it means to #DressLikeAWoman? Where do you feel most empowered and most like you? I’d certainly love to hear all about it, so tag a pic of yourself with the hashtag on Twitter and be sure to tag @melissablake so I see it!! #StrongWomen… xoxo