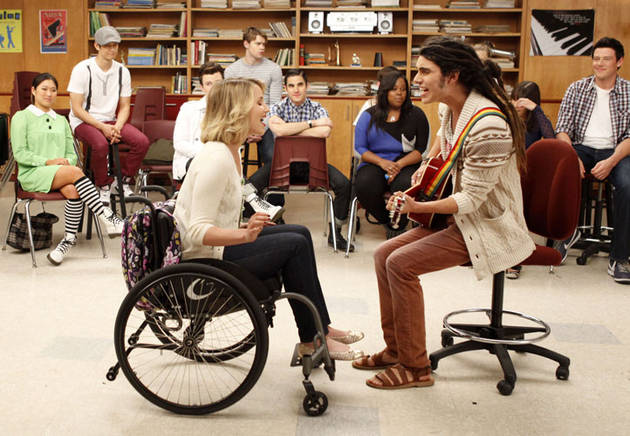 I suppose it’s only natural. Maybe even inevitable, really, if you think about it. Just as I’m starting to perhaps, sort of, kind of, come to terms with my disability where love and relationships are concerned, I come across a quote that swiftly punches me in the gut. Well, not literally, obviously, but it did feel like a pretty big shock to the system, you know, Sweet Pea?

“Nothing else is going to happen. It doesn’t matter what I want. I said goodbye to that part of my life. Joe took me to rehab the other day. We had a moment and before we kissed, he pulled away, grossed out by me and my chair. Joe’s not into me. I don’t blame him; who would be?”

And the most interesting thing? The quote came from Glee of all places. I mean, it’s not even a profound quote, but at the same time, it sort of is. It’s profound in its simplicity. Does that make sense? We can read all the deeply philosophical quotes that we want and those definitely have a place, but sometimes the words that mean the most — the ones that cut right through EVERYTHING and just get to the heart of your feelings. Sometimes I feel like screaming, “OMG, just get to the point already!”

Well, Quinn’s quote does exactly that. The language is stark, blunt and honest, and I can’t say enough just how refreshing this is. When it comes to television featuring characters with disabilities, it’s too often in that patronizing, “I’m a champion” way that, frankly, makes me want to throw my glass of Mountain Dew at the TV screen; it’s incredibly frustrating because in the real world, where I’ve lived 35 years as a disabled woman? That’s just NOT how things work, unfortunately. Trust me, it would be nice if life worked that way. But it doesn’t and I doubt it’s going to change any time soon. Thank goodness, then, that Quinn’s words are the absolute truth — a window into what so many people with disabilities experience. Sure, it may be something small, but at least it’s something. Plus, this was from an episode several years ago, so I’d like to think that we’ve come even farther since then. Have we? Gosh, I sure do hope so.

So, Sweet Pea, you’re probably sitting there wondering, “Where in the heck do I fit into all this?” Honestly, I’m not exactly sure sometimes, but I do often think that you’ll be hearing me talk about this a lot — maybe not forever, but most definitely in the early stages of our relationship. I’m probably going to be second-guessing your interest in me, wondering how you could possibly “be into me” and…maybe even try to talk you out of it a few times?

Really, is this how it’s going to be? Is this quote really a preview of what’s to come for me? That’s a pretty bleak future, but like I said, it’s rather realistic as well. So maybe I have to reconcile the two and find some happy medium — or try to find one, at the very least. Maybe I’ll find one. Maybe I won’t. But I can guarantee that I’ll be so glad you’re along for the ride, Sweet Pea! Until we meet… xoxo