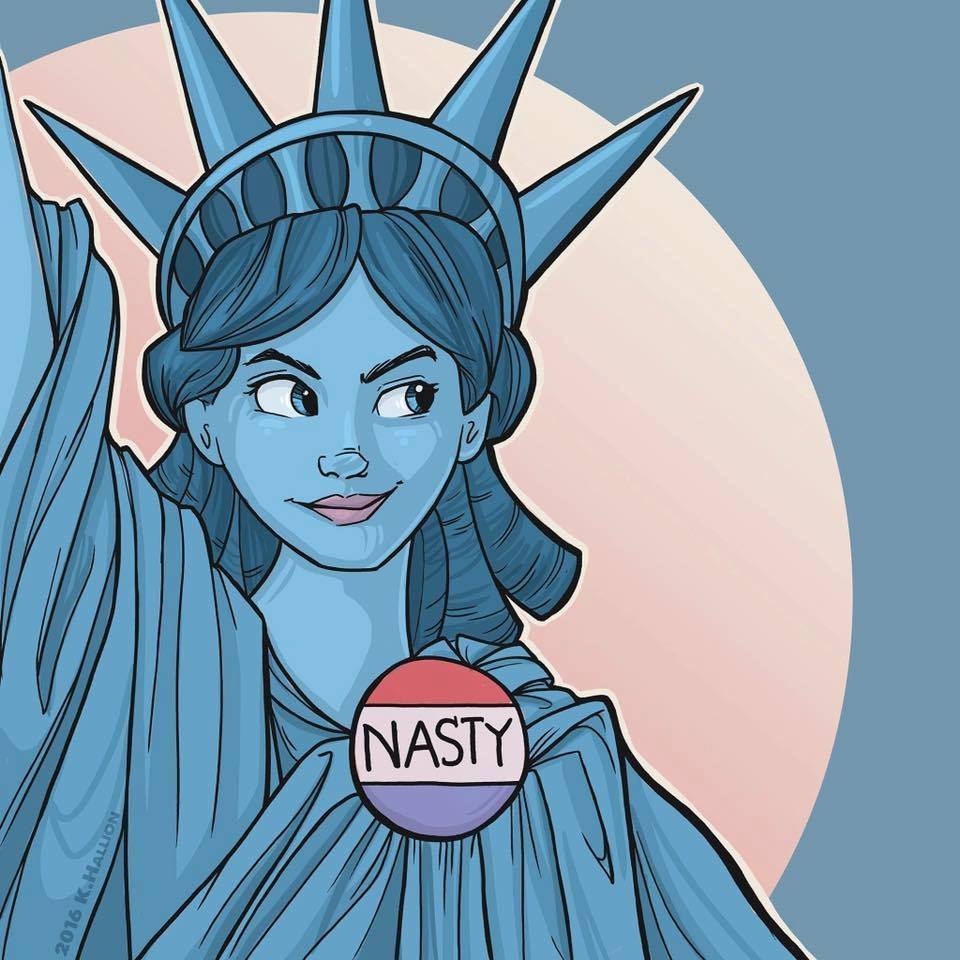 I was all set to officially unveil the blog makeover yesterday, but in light of the last 36 hours, it just seems incredibly wrong right now. So I will hold off until next week. Instead, I wrote this essay. There are many things need to be said and felt and processed. We’re strong and please know that I am with you — today, tomorrow and always!! I love you all… xoxo

I come from a long line of strong women. My grandmother left her small hometown in Michigan when she was just 18 and headed to bustling Chicago for nursing school.

My mom is never prouder than when she’s telling the story of how she’s never missed voting in a presidential election. When I was growing up, she’d regale us with her historic tales, and the older I got, the more I started to realize that her stories were much more than idle dinner conversation. Her stories were lessons. To her, voting wasn’t just a passive act. It was a responsibility — the kind not to be taken lightly. The kind that demanded participation. The kind that called you to raise your voice and say, “Yes, I need to be that change I wish to see in the world.” The kind that asked one question: If not me, then who?

And over the years, I’ve come to appreciate my mom and her lessons more and more. Not so much for showing me exactly what to do, but more for showing me what’s possible and the differences just one person can make.

So I suppose it wasn’t even a question that I would register to vote. When I turned 18, it came as naturally as graduating high school and heading off to college; it was just what you did — a logical step in growing up.

Yet being born with a disability also helped stir that fire deep within me. Part of growing up, at least for me, meant being a voice. And being a woman? That meant being an even louder voice. Maybe that’s why I’ve stood in solidarity with Hillary Clinton since the early days of her campaign. She’s stood tall and strong, which has made me feel tall and strong, but I won’t pretend that last night’s election results didn’t sting. I found myself at a loss for words, devastated at the thought of a future that rebuilds the glass ceiling and replacing all the light with utter darkness. Like so many Americans, I wondered…what’s going to happen to our world?

But this morning, I got out of bed. I pulled the covers off and put my feet on the ground. I felt shaky, but my resolve was still there. The resolve I’d built up, inspired by Clinton, because that innate fighting spirit is something that can never be taken away from me. It can’t be shattered by a loss or a disappointment, no matter how big said disappointment is.

We’re all strong. I learned that from my mom and Clinton.

Clinton didn’t just break through the glass ceiling; she shattered it into a million tiny pieces, blazing a trail for generations behind her. Regardless of your political leanings, there’s no denying the importance and impact of her historic nomination. The first woman EVER nominated. That’s quite an accomplishment and a confirmation that, yes, things are changing for the better.

We all have stories to tell and if I’ve learned anything from the feminists in my life, it’s that we must never shy away from those stories. We have a duty and a responsibility to speak up and speak out — against injustice, against bullies and against those who try to tell us that we have no place being who we are.

Because who you are is such a beautiful thing, and that is something to be proud of. Our world needs you now more than ever before. Don’t hide in shame or fear. Be brave and be you.

Dare I say, it’s made me the (nasty) woman I am today!