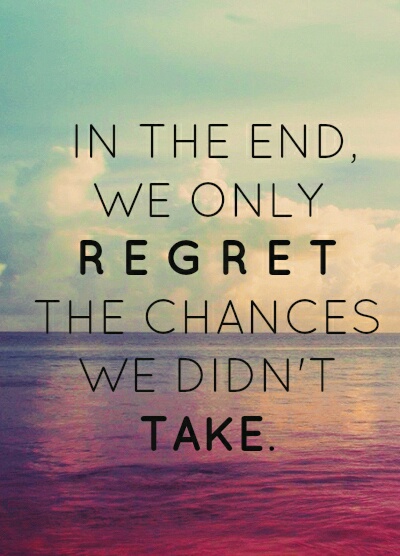 I’ve never really cared much for the word regret, but when you think about it, we all have them, don’t we? We can pretend we don’t or even try to downplay the ones we do admit, but the reality is that no one is perfect. And with imperfections come some regrets in life, whether they’re big (you betrayed someone and broke their trust) or small (you told a white lie to your best friend about her new haircut), so maybe the first step in consoling ourselves is in knowing that we’re not alone?

A Plus, the New York-based digital media company, recently took an interesting look at all things regrets with their chalkboard experiment. They placed a giant chalkboard in the middle of New York City for an entire day and asked passersby to write their biggest regret on the board. Although the regrets reflected people’s unique stories, by the end of the day, a common theme began to emerge.

A simple word linked all the regrets.

At the end of the exercise, all the regrets were erased. The board was clean, and you know what? People said they began to feel hope. Something that started out so negative turned into something positive for them — a clean slate. A clean slate waiting to be written on, full of things that you do that you won’t regret years from now.

So what do I regret in life? When I was younger, I tended to regret pretty superficial stuff, like not telling a boy I had a crush on him. It seemed so important and it was, I suppose, when you’re 15; I mean, your world tends to revolve around that sort of stuff. How could it not? It’s your life — it’s what’s going on all around you.

As I’ve gotten older, though, I’m starting to notice a shift in my perspective. I’m learning — albeit slowly, sometimes — to let those small and relatively petty things roll off my back. They just don’t seem to matter as much as they used to. Now, when I think of regrets, the first thing that comes to mind is my father. Is this natural? I regret not spending more time with him while I had the chance. I regret not being able to stop him on that fateful morning. That’s one that really weighs on my heart.

What about you, friends? If you feel comfortable sharing, I’d love to hear your thoughts on regrets. Which ones have hit you the hardest over the years? How have you dealt with them? Any advice you’d give people going through the same thing?