Now before you start letting your vivid imagination run wild, no, this is not a song about engaging in certain after-hours activities, if you get my drift. I mean, sure, that may be what it looks like on the surface — a song about letting go and just surrendering to all sorts of pent-up passion and yearning and longing and feelings and desires and…

Oh, right, the song. No, that sort of reckless passion is most definitely not what it’s about. Still, I suppose, it is sort of about a passion of sorts — the kind that’s more emotional than physical, more surprising than planned and less like you than anything you’ve ever known in your entire life. For me, there’s really only one song that captures that sort of experience for me, especially since it’s one I’ve lived over the last few years…

Yes, look beyond that ’80s mullet and really listen to the words from this crooning genius.

How do we explain something that took us by surprise
Promises in vain, love that is real but in disguise
What happens now
Do we break another rule
Let our lovers play the fool
I don’t know how
To stop feeling this way

Of course I don’t advocate cheating of any kind, I do know what it’s like to fall for someone you know you shouldn’t, whether it’s because you know it’s bad timing or because they’re just not the type of person you should be falling for. And for the life of you, you can’t quite figure out what your heart is trying to do. You certainly can’t explain it; you’ve tried and ended up 10 times more confused than you were before.

Well, I think that I’ve been true to everybody else but me
And the way I feel about you makes my heart long to be free
Every time I look into your eyes, I’m helplessly aware
That the someone I’ve been searching for is right there

So you go on, not coming right out and saying anything, but all the while knowing that you have this connection with someone. All the while knowing what a rare thing that kind of connection is. You know you should “turn off” those feelings — heck, that would be the mature, rational, logical thing to do — but you know what? Maybe right now, you don’t want to be logical. Maybe you’ve had just about enough “logical thinking” for your entire life. Maybe that’s the last thing you want to be right now, at this very moment. 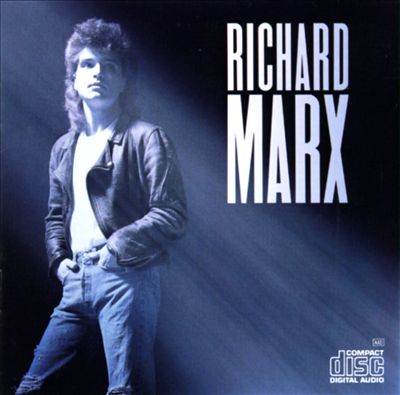 You know that you’re never, ever going to be the same because of this person, and, yes, maybe they don’t know it (at least in my case…), but that’s OK for now. You just never know what’ll happen in the future, do you? I mean, if Richard Marx was able to live down that mullet, then I’m guessing there’s hope for us all… xoxo