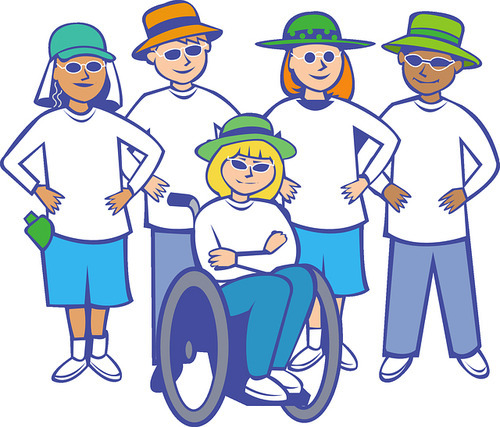 From the day I started kindergarten, my mom was insistent that I remain in the regular classroom with the rest of my peers. Well, looking back now, insistent might be a bit of an understatement. It was more like her #1, non-negotiable priority. She wouldn’t settle for anything less, and way back in the ’80s and ’90s, full inclusion was something of a rarity.

But she was right. And, as it turns out, the benefits went both ways. Being surrounded by my able-bodied peers gave me a sense of belonging, like I somehow wasn’t so different from everyone else and that I was just like everyone else. As early as kindergarten, I suppose, I learned that I should never let my disability hold me back from anything in life.

As for the other kids in my class? Their world view was expanded, a world view that would set the foundation for the rest of their lives. They saw me — someone their age with a walker and a wheelchair — and may have thought, “Hey, she’s playing my favorite game! She’s just like me!”

“We have known for some time that integrating children with disabilities into the regular classroom can improve attitudes,” said study author Megan MacMillan. “What we have established here is just how much of a difference a greater presence in day-to-day life makes.”

It’s true. When all is said and done, it’s really about changing perceptions people have of children with disabilities. Heck, it’s about changing perceptions of ALL PEOPLE with disabilities. And like the study shows, a lot of it starts with children. It’s so important to introduce them to people who aren’t exact carbon copies because that’s not how the world is. The world is one giant and beautiful melting pot, which is a pretty amazing thing if you think about it.

Imagine what’s out there, if only you step outside and see, friends! xoxo