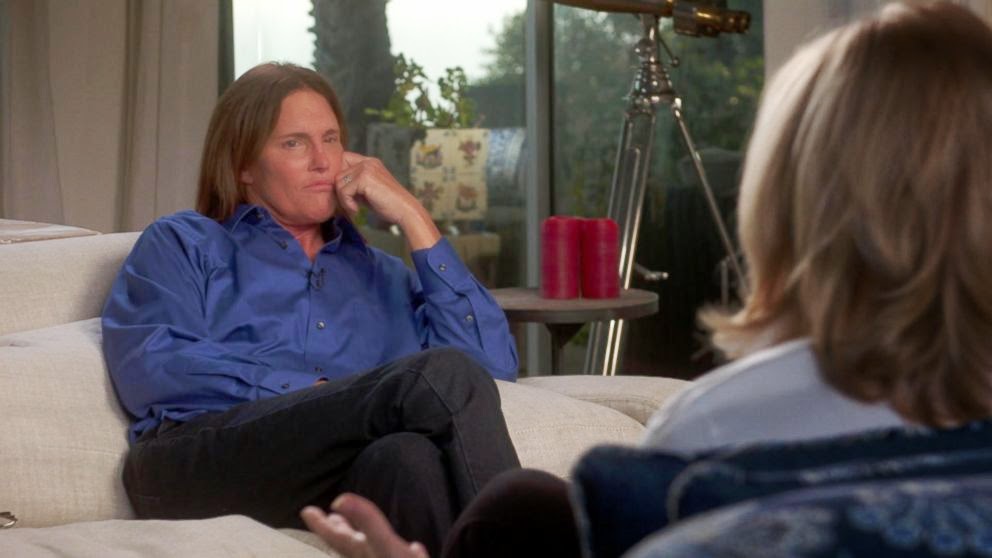 I suppose there’s really no point in stating the obvious: I was so incredibly moved by your interview with Diane Sawyer last week. Well, honestly, I’d been looking forward to it for awhile. I was anxious to hear your words and your story directly from you. I knew they would be powerful words, and sure enough, I was right.

I’m, admittedly, of the generation who associates you more with the Kardashians than with the Olympics. You’ve always been one of my favorites on the show, but over the years, I’ve noticed you beginning to slink into the shadows. You seemed very wary of the cameras, like you preferred to be alone. And as you got less and less screen time, I began to miss you.

Well, after watching your interview, it’s safe to say that you’re back — at least, we’re starting to see glimpses of you. Your happy self. Your insightful self. Your confident self. You really came into your own in this interview. It was like we were seeing a new Bruce, but at the same time, it was the old Bruce. You were calm and collected and optimistic about the future.

You were, in a nutshell, your old self again. You were your true self. I wasn’t the only one who noticed. New York magazine described your metamorphosis perfectly…

This wasn’t the vague, scattered ghost dad we’d seen before. He was honest and forthright. He didn’t mince words or clench his teeth or put an overly optimistic spin on things or resist hard questions. The Bruce Jenner we met on Friday night was a testament to the power of honesty. He was transformed into someone bigger and brighter and more comfortable in his own skin than he’d ever been before.

And just like that, he went from being a suspicious figure, a strange guy perhaps trying to upstage his wife’s carefully constructed empire, to a strong, eloquent individual ready to fully take on his new role as transgender hero. The transformation was so radical and so stunning, it was impossible not to be completely mesmerized. The way Jenner held himself, cried, laughed at himself, and fully inhabited himself onscreen was completely at odds with the person we’d known before. There’s no other way to express it: It was like watching a butterfly break out of its cocoon.

What I love about this is that you did it on your own terms, and that’s such a beautiful thing. You’ve been hounded for longer than you’d care to remember, but you didn’t cave to any sort of pressure. You knew when the time would be right and I’m so glad you found it in Diane Sawyer.

I’m sorry that you have to deal with those people who assume that you’re “doing this for publicity.” Frankly, those people disgust me. I’d like to challenge them to spend one day forced to be someone they’re not. But, don’t pay them any attention because you’re the true winner here. Never, ever forget that. It was inspiring to watch you talk and look fully at ease with who you are. I got the sense that you don’t feel the need to hide in those shadows anymore; you’re not afraid of being who you are. You’re starting this new journey in your life and it was wonderful to see a glimpse of how you’re approaching it all. I can only imagine how stressful and frustrating it must be at times, but you’re handling it with a calm and quiet grace that is quite refreshing!

Thank you for telling your story because, as I’m sure you know, it’s not just your story. You’re telling the story of thousands and giving them a much-needed voice — a voice that many of them don’t have or are afraid to use. Thank you for being you and thank you for your honesty. You’ll always be a hero in my book. Forever and always. xoxo