It’s often said that presentation is key, and sometimes, how you present something is integral to getting your message across. And sometimes still, it’s the little touches that pack the most powerful punch. Enter Laura Worthington. She’s a creative force who creates original, unique and beautiful fonts. As a typeface and lettering designer, she loves the journey of each project — from the early stages of developing a concept to digitizing on the computer. “I love the feel of pen or brush as my hand sweeps across just the right paper,” she says. “Each project is a journey that I undertake with enthusiasm and joyful discovery—and gratitude that my background in graphic design, calligraphy and typography has given me the opportunity to focus on what I most want to do.” Read on to learn more about Worthington’s background, how to add flair and creativity to your own life and a fun look at what her life would be like if she were an actual font! xoxo

Tell me about your shop. What’s the inspiration behind its launch? What got you into hand-lettering typefaces?
I started designing and selling my fonts at the very end of December 2009, first through MyFonts.com and then through other online distributors. This arrangement worked well for me, the distributors handled everything from promotion, processing payment, handling customer service and technical questions. I had debated for years about launching my own e-store, but I knew what it required — money, of course, but my biggest concern was handling customer service. Would I be able to answer everyone’s questions in a timely manner, especially if I was out of town for a business trip or vacation? What if they had technical issues I didn’t know how to help them with? Ultimately, I guess I just needed the time to be right. And at the beginning of this year, I decided it was time. It ended up being the best thing I have ever done! I have direct contact with my customers, which I absolutely LOVE! I’ve made so many e-friends, discovered who my customers really are (rather than before when I was just guessing) and the thing I was most concerned about — the technical issues — ended up being a blessing in disguise. Not only have I learned so much more about how type is used across platform and in different apps, but I’ve been able to help people out with their digital frustrations. It’s been wonderful.

My entry into typefaces began very early in my life. I became fascinated with handwriting and calligraphy at nine years old and pursued this passion throughout my school years. When it was time to go to college, I got into graphic design as a means to do more with lettering, but I found it wasn’t enough. As luck would have it, I became friends with a fellow lettering artist and designer who had also designed fonts and strongly encouraged me (pushed me is more like it…) to design fonts. After a couple years of him pestering me, I relented when I finally had time to devote to learning this new craft. And the rest is history! Just a few hours into designing my first typeface, I knew I had found my purpose and calling in life that I had been searching for. I made a decision that, no matter how long it took, I would become a full-time typeface designer. I thought it would take a couple of years. It only took nine months. And I love it!!!

Takes us through the process of designing a new typeface — how do you come up with new ideas, what’s the process like, etc.?
You know, I wish I could say that the process is clear and well defined with every step put neatly into place from beginning to end; however, that’s not the case. There’s a lot of back and forth between lettering on paper and working on the computer. Coming up with ideas is never a problem — coming up with ideas that are truly unique is what I struggle with. I find that journaling my thoughts, adding to a massive library of inspirational images and experimentation are key. Sometimes I come up with an idea in my mind first, then try to get it out on paper. Other times, I come up with an idea inspired by what I’ve done while lettering or sketching. Once I’ve made a decision to pursue a design, I set about lettering as much as I can in that style. When I’ve developed enough muscle memory to recreate this style with ease, I make a couple of master sheets that contain all of the letters, numerals and punctuation. I scan in everything, including the practice sheets. Then I go through the lettering, find the best looking model of each character, bring it into FontLab and trace around it.

Once I’ve got everything drawn and haven’t decided to abandon the idea, which happens at least half of the time, I then go to work viewing all of the characters in various settings and adjusting them so they all play well together and work as a system. Then there’s the technical part, kerning (adjusting the space between two glyphs – you have to look at ALL pairs, which is thousands!) programming features, testing, getting promotional images and user guides made, along with descriptions and packaging everything up for my distributors. And then I sit back and hope that it’s well received!

What are your top 3 tips for adding flair and creativity into your life?
*Learn to be observant of everything around you, which may seem like a lame, ubiquitous suggestion, but it is easier said than done! Inspiration is everywhere, but you have to train yourself to look for it. Awareness is everything.
*Develop and identify the things that put you into a creative frame of mind and do them as often as you can. For me, it’s taking a walk, a drive, working someplace different, such as a park or a coffee shop.
*Surround yourself with objects and images that inspire wonder. Most of the “artwork” on my walls are scientific specimens — butterflies, moths, insects and so on. Nature is art and I never get tired of studying the wondrous ways life has evolved and the intricacies of it all. I also spend time looking at images of artwork and places in nature that are striking and beautiful.

What are some of your favorite typefaces of all time and why?
That’s an enormous list! Hard to whittle it down. For text, I love Minion, it’s delicate, and beautiful in a simplistic way. For word processing and on-screen purposes, I like Calibri which has a simple sophistication about it. Trend by Latinotype is another favorite. And for script fonts, Belluccia by Debi Sementelli. 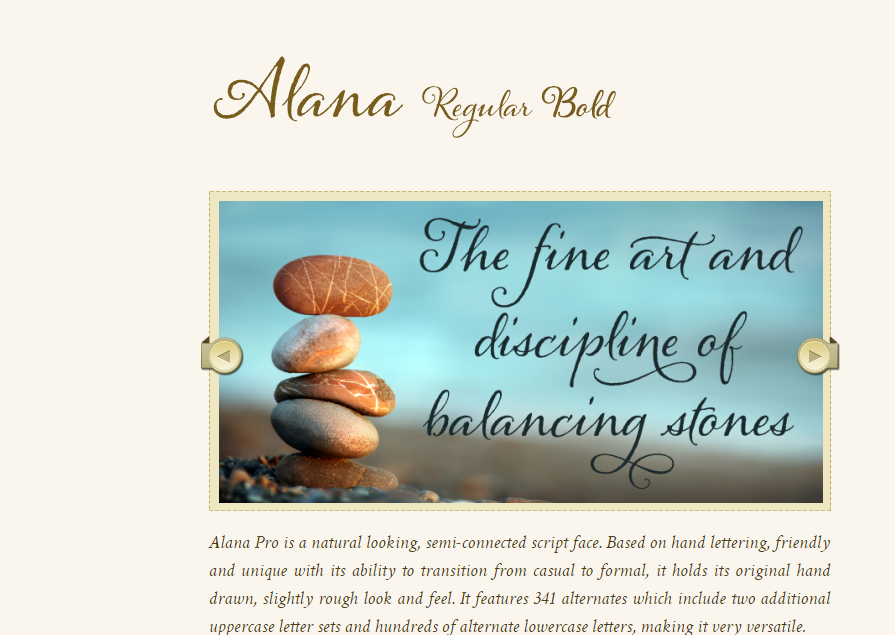 If your personality were a typeface, which one would it be and why?
I would say out of all the fonts I’ve designed to date, the one that is closest to my personality is Alana. Which is ironic as it’s named after my little sister. It’s a bit rough around the edges, very detailed, whimsical and a bit quirky — just like me!