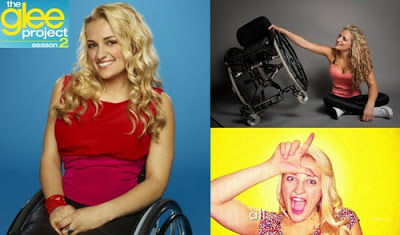 I’ll be the first to admit it: I’m a self-proclaimed Gleek. I’ve always thought the show struck that perfect balance of being refreshingly entertaining, but also purposefully, responsibly and respectfully taking on important social issues, from bullying to underage drinking. But what I found particularly poignant? The character of Artie. Now here was a TV character that defied stereotypes. He was in a wheelchair, sure, but by all other accounts, he was just like any other member of New Directions — all at once, a starry-eyed dreamer and confused, soul-searching teenager just trying to figure life out.

My only quibble? Maybe it’s a minor one, really, but I always wished that the actor who played Artie was actually paralyzed in real life. Kevin McHale does an excellent job, of course, but an actor who also had the disability of the character they play could bring such an interesting bent to the show.

And then I caught you on season two of Oxygen’s The Glee Project. Finally, I thought, here was a woman who isn’t afraid to be who she is. She’s comfortable in her own skin — and in her own wheelchair (do you call your wheelchair your ‘wheels’ like I do? Or maybe that’s just me…). The more episodes I watched, the more I realized that all the positive influence you’d bring to the table, especially for young people with disabilities. On last week’s episode, you said that it’s important for teenagers with disabilities to feel like they can be sexy. This message, as I write about a lot on my blog, is something sorely lacking in today’s media. 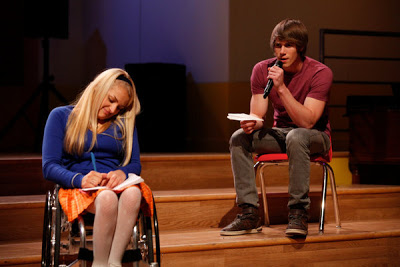 So, thank you, for being a role model for young people with disabilities everywhere. Thank you for showing them what a beautiful thing it is to have confidence in yourself, no matter who tries to tear it down. Who says people with disabilities can’t be — and shouldn’t feel — sexy? No one should have the power to take that away from you and make you feel anything less than beautiful. Thank you for representing that each and every week. I hope to see you on Glee next season! xoxo