To the Editors of Seventeen: 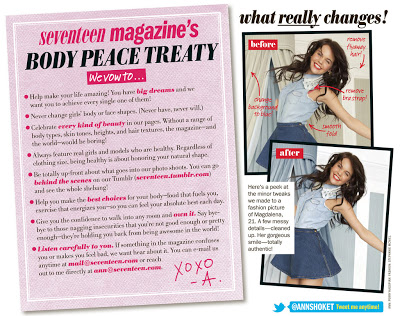 This letter is a long time coming. But then again, so is the recent vow you made, a vow that Seventeen truly represent its readers and show girls as they really are.

Now, it’s been a few years since I said goodbye to my teen years. When I was 14, no one had heard of Google, you were considered cool if you had an email account and everyone would be impressed if you created a Web site using something other than Geocities. It was a simpler time back then, indeed. With all the technology young women are inundated with today — from blogs to Facebook to Twitter to magazines — I can only imagine the pressure they must feel. Everyone is whispering in their ears. They’re told how to act, how to dress, what to say, what to do and how to look. And, unless they fit into that perfect crafted cookie-cutter mold, well, there must be something wrong with them, right? They must change, right?

Of course not, and I’m glad that you’re one of the first magazines that will stand up and say, “Yes, we need to do the changing.”

After all, when readers recently voiced their concern that photos in the magazine had been Photoshopped or otherwise digitally enhanced, you could easily have (air)brushed it off. But you didn’t. Instead, you listened to your readers. They rightfully feared that this retouching trend was going too far, was setting unrealistic expectations and sending negative messages. One frustrated reader who demanded change? Fourteen-year-old, Julia Bluhm, who began petitioning the magazine in April over its use of Photoshop and requested that it feature one unaltered photo spread in every issue. After some 86,000 signatures, you’re (finally!) listening, Seventeen! “We want every girl to stop obsessing about what her body looks like and start appreciating it for what it can do,” says Editor-in-chief Ann Shoket in her editor’s letter in the August issue.

Thanks to Julia and other fearless readers, you also announced a new Body Peace Treaty that will be adopted staff-wide at the magazine. Now there’s the power of young people. Julia got everything right, and I can’t help but feel as though she represents the voice of the new generation — a group of fiercely determined young women who aren’t afraid to fiercely fight for what they believed it. They strive to be self-assured, and they want to see themselves in the pages of your magazine. They want to see all shapes, sizes, skin colors and disabilities (more on that in a bit…) celebrated every month.

Will it completely redefine and shift ideals of beauty? Probably not. But it will surely spark a dialogue that makes girls (and guys!) realize their full beauty and worth. I hope you will continue to emphasize girls’ positive body image and encourage them to be happy and secure in their own skin. My only suggestion? When I’d read Seventeen as a teen, I often wondered why you never featured any girls with disabilities in the magazine. Any chance you could change that?

But really, thank you, Julia and Seventeen. I say this is a win for young people everywhere, don’t you?