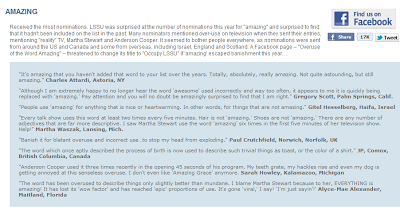 Last week, Michigan’s Lake Superior State University published its 37th annual List of Words Banished from the Queen’s English for Misuse, Overuse and General Uselessness. The list, which contains some dozen words or phrases, is based on nominations from around the globe. The word that got the most nominations this year? Amazing — it received more than 1,500 nominations. My three favorites from the list are above, along with explanations by those who nominated them.

What do you think of the list, friends? Do you agree or disagree with the words? What words do you think are overused? Any words that just particularly annoy you?