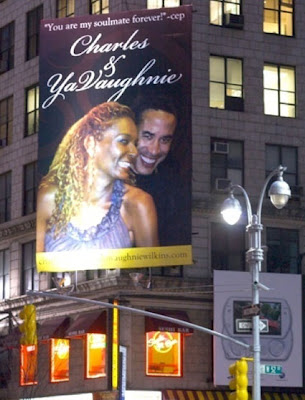 Call me crazy, but I just don’t understand people who never want to get revenge. You know, those types who say, “Oh, well, I’m going to rise above it.”

You’re not fooling me here. Whether it’s a cheating boyfriend (I’d be like Carrie and key his car), a bad-mouthing friend or a jealous mean girl, we all want revenge. Whether we admit it or not.

And some of us are actually brave enough to take our scorned hearts and use them to pummel those who wronged us.

Take the case of Charles Phillips and YaVaughnie Wilkins. He’s a member of Obama’s Economic Recovery Advisory Board (hint: look for the irony in a bit). She’s the love of his life, at least according to a billboard sighted in several spots in Manhattan recently. Emblazoned on the billboard for the world to see are these words:

‘You are my soulmate forever! – cep’”
“charlesphillipsandyavaughniewilkins.com”

Log on to that lovely site, and it all becomes clear. Photos and notes chronicle, not the love of a happy, committed couple, but the deceit, deception and lies that rolled off a married man’s tongue (probably among other things that rolled off said tongue…) and into the heart of his mistress!

Now, I don’t condone cheating, but if you have been wronged? What better place to let everyone know about it than in the heart of the city that never sleeps?

Me? I fully admit that I do my best revenge work on my blog. I’ve never lied about that, and I’ll never change my policy – see my handy disclaimer if there’s any doubt about it.

So, friends, where do you stand on the revenge spectrum? Is it ever not justified?