Remember the classic ’80’s movie National Lampoon’s Vacation? That classic where Chevy Chase takes his family on a cross-country roadtrip, they get lost in a bad town, the grandmother dies in the desert and by the time they get to Wally World it’s closed? 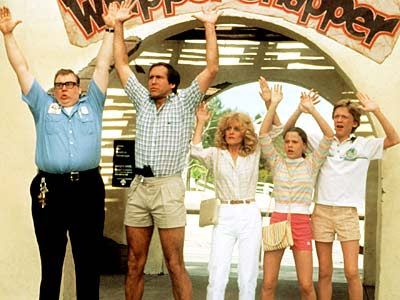 My family actually makes that movie look tame. Seriously. We’ve had our fair share of classic vacation moments. Though they didn’t seem funny at the time, looking back, they’re hilarious! Our first tale from 2006 is told 24-style, but without the fate of the world on my shoulders….

In a mere 10 days, I’ll be descending upon the happiest place on earth. No, not Disneyland, although I’m sure those larger-than-life Seven Dwarfs never fail to bring smiles to millions of faces every day. Get out your trusty old map and find DeKalb. Now trace your finger along Interstate 65 from the top of Indiana all the way down, down, down. My family’s biannual vacation to good old Dixie is upon us. One glorious week of fun in the sun with Gramps and his lovable big, black dog, Cowboy. A family’s vacation style says a lot about who they are, and I often think it would make a good subject for a psychological experiment. How do families interact? When’s the breaking point? Where in the heck do those inner demons come from? In the hopes of advancing science for all mankind, I’d like to offer my family as a solid case study. I must preface this, though, by saying we are in no way a “typical” family. Frankly, we’re all a bit kooky. In fact, it’s getting worse by the day, expanding like a helium balloon. And when we’re all together, each person’s individual wackiness has this nasty habit of feeding off the others.

My mother’s neuroses emerge like a tidal wave a week before we depart. She ceremoniously sits down at the kitchen table with her pad and pen, her hand shooting across the page like an old-time movie in which the film suddenly speeds up. Stop the mail. Stop the newspapers. Stock our medication. Suddenly, a deep paralysis washes over us, and we are incapable of scaling the mountain of tasks before us. The list sits in the center of the table, turning yellow with age and crinkling with creases. It’s around 7 p.m. on the dark winter’s night before “V-Day” (the V stands for vacation) when the list begins to emit a glow to get our attention. The clock ticks, and we begin the race like marathon runners. Psychologists, take note that this is the scene of the first scuffle. I hear the faint sounds of my mother and sister arguing vigorously about just how many outfits to pack.

My sister the fashionista insists she needs at least five outfits and two nightgowns. My mother, the minimalist, retorts, “We’re taking one suitcase and that’s all there is to it.”

Day 1: I’m swiftly jostled from sleep by my mother’s pounding as she loads up the car and shouts every five minutes, “Come on! We should be on the road right now!” It’s 6 a.m. At 8:30, my sister is just stepping out of the shower, and my mother is making her third lap around the house, checking every light and faucet like they were holy shrines. We peel out of the driveway at 9 a.m. I can’t help but feel a bit claustrophobic when I see a mammoth cooler, two pillows, jackets, my walker and my sister’s suitcase next to me. I guess my mother lost that battle. And she loses another as the raspy voice of Bob Dylan comes blasting through the car speakers. All I can do is pop some Christina Aguilera in my Discman to drown out that harmonica. “Look at this. We’re making excellent time,” my mother gleefully chirps. We’re parked at the Indiana Welcome Center, only two hours into the trip. But that’s the beauty of the first day. There’s so much promise, and we have a long stretch of open highway before us. We’re just happy to be together and enjoying each other’s company. Cue sarcasm. “Idaho!” she hollers an hour later. Oh, how much I dread the mention of the 50 states. It means I’ll have to open that pesky purple folder, filled to the brim with directions and hotel reservations, search for those darn stickers, peel off the appropriate one without ripping it and place it in the proper geographic spot in the license plate book. “Minnesota.” Got it. “Ohio.” Got it. “South Carolina.” Got it. “Ohhh, Alaska.” I’ll do it later. By the time we get to the hotel, we’re too tired to do much of anything. Sitting on those big hotel beds, we feel like we’re still moving after eight hours in the car. The atlas we brought lists every Wal-Mart in North America. I know if there’s one within a 50-mile radius; I can smell it like a dog smells fresh meat. We enjoy deli meat and cheese as we sprawl on the bed and watch a cheap medical special on Discovery Health.

Day 2: We rise again at 6 a.m., but ever the consistent family, leave the hotel at 9 a.m. following our free hotel continental breakfast. To get in the festive spirit, my mother smiles as she listens to Burl Ives’ “Holly Jolly Christmas.” After four Holly Jolly Christmases, my mother and sister launch into song, singing everything from holiday tunes to my personal favorite, my mother’s solo rendition of &#8220On The Street Where You Live.” By the time the afternoon sun hangs heavy in the sky, we break out the M&M’s and play a few rounds of the travel version of “Jeopardy!” (Over the years, my sister and I have learned to keep my mother well fed, well hydrated and well occupied.) We pull into the next hotel tired but anxiously anticipating sunny Gulf Shores the next day.

Days 3, 4, 5, 6: We give new meaning to the word “relaxing” while at my grandfather’s retirement community. Most days, we sit around the little apartment, me surfing the Web, my sister reading and Gramps watching “Matlock.” Occasionally, we’ll go shopping or to a nice restaurant, such as the Golden Corral, but we’re just as content to stay home and watch Cowboy run around licking each of us excitedly.

Days 7, 8, 9: We hug Gramps goodbye and say hello to the family car seats. Whereas everything was in its proper place on the way down, the oversize atlas has been angrily thrown in the trunk, and I haven’t touched the license plate book since we spotted a Michigan license plate. The bickering culminates at around LaSalle-Peru: “Turn the music down.” “I’m squished back here.” “I’m hungry.” Like the Berenstain Bears, we’ve had too much vacation. We vow that we never, ever want to go on vacation again. So what’s my family’s vacation style? I’m not quite sure, but I know it’s mixed with a dash of sass and plenty of good times. Just last week, my mother started the list and it’s now sitting on our counter. She and my sister have even started bickering about the suitcase. Ahh, it’s going to be a good vacation.

Check back all week and laugh at my family’s vacation history rap sheet. Can you identify with any of them? Share your story!