I’ve been furiously biting my nails all weekend and replaying the entire scenario in my head, the thoughts spinning around and around like a stomach-churning ride on a carousel.

Honestly, I can’t help feeling like I’ve gotten myself into one big giant mess, one I should have learned to 10 years ago. But why couldn’t I learn it? Oh, that’s right — I spent most of my formative teen years hooked up to IVs or being given trippy anesthetic in preparation of another surgery. That’s why, as I’ve said before, I feel so far behind my peers in a lot of ways.

And I think the way I’m handling the whole Crush Boy situation is just another example of that. When he hinted that he knew I was writing about him, I thought honesty would be the best policy. Right? There’s no way he could ever, ever have feelings for me, right? Who would think I’m even dating material? I certainly don’t sometimes. Besides, when I admitted it was him, I did so because most of what I wrote about him on this blog had to do with my feelings in high school. Of course I still like him, though I’m not so sure it’s the “in-that-kind-of-way” like anymore. He was my first love, my first real teen girl crush. I figured he’d assume that’s all it was too.

Then he sent me an email asking me what I was doing this weekend. And what did I do? I panicked? I didn’t think it would go this far. I never intended for it to go this far. OK, for other people, more experienced people, shall we say, this wouldn’t seem like much AT ALL. But remember a little thing called my lack of relationship rules and my tendency to be, umm, awkward? Yeah, that’s not a good combination. Plus, he never answered my question about having feelings for me now. I tried to come up with a witty email to make light of the whole situation, and managed to come up with this: 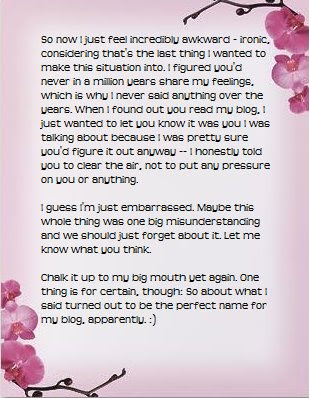 So what’s the verdict?? Give it to me straight — I can handle it. Will I end up the old lady in the apartment building with three cats on her lap?