I’ll be the first to admit that I’ve been avoiding reading this email for a week. Yes, I’m talking about that email. Last week, I finally (thanks, I think in part, to this blog) just bit the bullet of confidence and unabashedly put my feeling’s at Crush Boy’s feet. I didn’t intentionally do this (as in, deciding in 2004 that “OK, in March 2009, I’m going to tell him exactly how I feel.” To the contrary, things just naturally unfolded this way. He reads this blog (who know, maybe he’s reading it right now) he’s a smart guy and we both knew who I was talking about, but neither of us would acknowledge that GIANT WHITE ELEPHANT in the room. I took it upon myself to just bring that beautiful elephant into the spotlight.

I wasn’t expecting a reply. Not because the guy’s a jerk (which, obviously, he’s not), but more because I assumed I’d probably scared the poor guy out of the country with my musings. I thought it would just continue to be this weird, unspoken thing between us fof, well, the next decade.

Then last week, I got this email from him with the subject line Fortes Fortuna Adiuvat (I had to look that one up — it means fortune favors the brave) 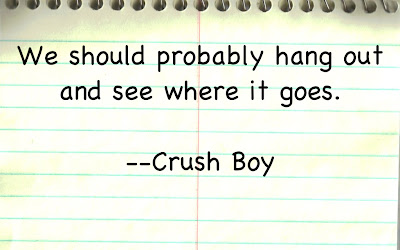 So after years of wondering what he’d possibly say if I ever uttered what I thought was the most unthinkable, desperate thing I could ever do, he ultimately thinks my act was a brave one? After all, I was still pondering if it was courageous or just plain stupid. Whew! I’m glad he thinks it wasn’t stupid. Maybe not stupid — more like painfully desperate.

But you know what? I somehow didn’t feel so desperate. I felt just the opposite, actually. I felt a sense of power — for the first time in my whole non-existent love life. I came to the realization that honesty is never something you should regret, feel ashamed for or metaphorically beat yourself up over.

What did I write back? That’s where the whole week-long delay comes in. I, frankly, didn’t know how to respond. Was he blowing me off? Did he think I was Fatal Attraction material? I settled on this:

So I haven’t been avoiding you. I’ve just been trying to think of a suitable reply. I can totally understand if you’re caught off guard; I know I would be too if I were in your situation. I just felt like we both knew who I’m talking about on my blog, and since I’m all for honesty, I just thought I’d just bring it out in the open.

Anyway, it’s totally cool if you don’t feel the same. Don’t worry. I’m a strong girl; it won’t shatter my heart or anything. 🙂

Hope you have a good week!

Can someone help me decode his email? Please? Because I’m getting the feeling that he’s using one of ‘those’ lines — you know, the kind you use to let someone down easy so you don’t hurt their feeling when all you really want to say is, “Who are you, you psycho freak???” That, or he’s looking at this as just some huge science experiment.