Alright, I admit it: I’m a sucker for a cute love story between animals (and no, I’m not talking about the human species here). I found this story thanks to AOL News about matchmakers who set up two polar bears. I love the paragraph in bold….a polar bear who’s a polar bear’s polar bear (sort of like a man’s man, I’m guessing….) 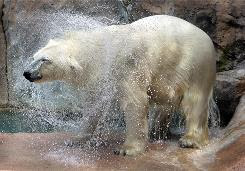 (Feb. 16) – Aided by some human matchmakers, Nanuq the aging polar bear from Wisconsin has a date in Buffalo with Anana.

“He will be there in Buffalo awhile,” says Jim Hubing, director of the Henry Vilas Zoo in Madison, Wis. “They will know probably by late summer or early fall if she has conceived.”

Polar bears were added last year to the list of threatened species under the federal Endangered Species Act, and scientists used careful genetic matching to pair the two bears to ensure genetic diversity.

Nanuq is considered a good catch as a mating partner, says Donna Fernandes, head of the Buffalo Zoo. He was captured in the wild as a cub in 1987 and thus, unlike polar bears born in captivity, brings a unique new genetic code to the party.

Nanuq’s name recalls Nanook of the North, the classic 1922 documentary by Robert Flaherty about an Eskimo hunter in the Canadian arctic. The black-and-white film became a classroom staple for generations of schoolchildren in the mid-20th century. Nanuq and Nanook are alternative spellings of the Inuit word for polar bear.

Nanuq is 22 and was rescued along with his brother Norton in Alaska in 1987 by the U.S. Fish and Wildlife Service after their mother was shot by a hunter, Hubing said. He was flown to Henry Vilas Zoo the following year.

He is awaiting transport to Buffalo this month in a specially outfitted truck. There he will be introduced to 8-year-old Anana, who was born in captivity. Neither bear has ever bred before.

“He’s very old — that’s our concern,” says Fernandes, who adds that her zoo’s doctors will give the old boy a cardiac test first to make sure his ticker can handle the excitement ahead of him.

“This is like an 80-year-old male with a 20-year-old female,” Fernandes says. “We’re hoping it works and certainly willing to give it a try.”